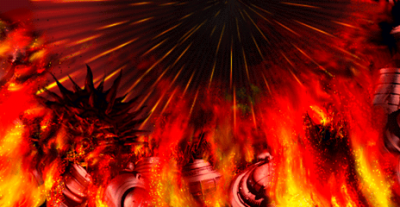 Boss information can be found at Lavos.


Lavos is a colossal, extremely powerful alien invader from unknown parts of the universe. He was originally named by Ayla, with La meaning "fire" and Vos meaning "big." Lavos fell to Earth in roughly 65000000 B.C. and burrowed deep underneath the planet's crust. From that position, he began absorbing DNA as creatures evolved on the planet. This course of action was part of Lavos's effort to create the best possible collection of genes to pass on to his spawn, who would then presumably travel to other planets and repeat the process. Lavos too had probably been born as a spawn on another ruined planet. Lavos landed directly on top of the Tyrano Lair, smashing the kingdom of the Reptites and eventually allowing humanity's rise to dominance. As suggested by Chrono Cross, around 3000000 B.C. the ancestors of humanity came into contact with the Frozen Flame, a part of Lavos that was lost and splintered off when he crashed to the planet. It rapidly accelerated human evolution, rendering modern humans and their intellectual faculties, including some with the ability to use magic. These magic-using humans formed the kingdom of Zeal in the era of 12000 B.C. They were responsible for many great feats of magic and science, including the Time Egg, the Blackbird, and the Masamune. In the kingdom of Zeal, Lavos is treated as a god, especially by Queen Zeal herself. The Mammon Machine, designed to draw power from Lavos, derives its name from the Hebrew word for "sin," giving a clear indicator of the malevolent nature of Lavos's power. Their downfall came when they attempted to harness Lavos's power through the use of their Mammon Machine; the effort failed, and resulted in Lavos's destruction of Zeal and its Ocean Palace, as well as his absorption of Zeal's princess, Schala in Keystone T-1 and on.

With Zeal no longer around to oppress the humans who did not use magic, they emerged to form their own empires. Lavos largely waited under the planet's surface after that time, though he made a brief appearance in 600 A.D. to kill Magus after being summoned by the warlock. In 1999 A.D., Lavos erupted from the planet's surface, utterly devastating human civilization and other life; only intelligent machines still operated in remote areas. This apocalypse came to be known as the Day of Lavos. By 2300 A.D., only a few humans were left, and these were being systematically murdered by the berserk Mother Brain supercomputer. The ones that were still living were hungry and hopeless, as food was scarce after Lavos destroyed almost all life on the planet. Crono, Marle, and Lucca glimpsed this terrible state of affairs when they were catapulted into 2300 A.D. After viewing the footage of the world's end, they resolved to change history, and they eventually did defeat Lavos, destroying him and banishing the post-1999 Lavos Timeline to the Darkness Beyond Time to create Keystone T-1. During the battle, Lavos combined the DNA he had collected to create an ultimate version of himself (still not enough to defeat Crono's party).

It is important to note that Lavos did not control all evolution. Magus states something to this effect, but it's a mistranslation. Chrono Cross supports this by making no mention of Lavos directly influencing the world save for humans, who were altered after contact with the Frozen Flame. Lavos's impact in the game mirrors an event in our own history. The archaeologist Dr. Luis Alvarez found with carbon dating that in 65000000 B.C. a massive nickel-iron asteroid pinned as between five and ten kilometers in diameter collided with Earth. The ice age this asteroid brought on presumably ended Earth's Cretaceous period, wiping out the dinosaurs - events shown in the game and foreseen in Azala's lament after the player defeats him and the Black Tyrano. The kinetic energy the real-life asteroid had in its impact can be pinned within a range of a few hundred gigatons to as much as 100 teratons, outstripping the entire world's present nuclear arsenal potentially thousands of times over.

After Lavos was defeated, he was possibly sent to the Darkness Beyond Time. There, he intercepted Schala, who came in from the Ocean Palace Incident; he then merged with her to form a new being, the Time Devourer, capable of consuming all space-time at maturity. Belthasar planned every event in the game so that Serge could get his hands on the Chrono Cross artifact and destroy the Time Devourer. Within the confines of the Time Devourer rested both Schala, imprisoned for millennia in his body, and the true Dragon God, the biological supercomputer defeated by FATE and its fighter jets in 12000 B.C. Lavos was using the Dragon God in its separated forms in order to retrieve the Frozen Flame, a piece of him that splintered off when he crashed to Earth. The Frozen Flame acted as Lavos' eyes and ears during this entire endeavor. He very nearly succeeded in his plan, but was brought to justice by Serge and his party. The Chrono Cross effected the Unification of Dimensions, and the separation of Schala from Lavos resulted in his death at last.

The Frozen Flame was shown to serve as an uplink to Lavos; before the fight with the Dragon God in Cross, the characters speak directly with Lavos through the Flame. Lavos's responsibility for humanity's final evolution is implied to be a basis for the criticism of humanity by the Dwarves and Demi-humans, who accuse humans of ruining the environment and planet. Lavos could metaphorically be a very evolved state of humans. Humans are commonly thought of as part bestial, base matter, and part divine spark. In the Chrono series, it seems as if the divine spark -- Lavos's evolution -- is evil, and the harmonic earthly part of humanity is good. Nonetheless, humans have the chance to vindicate their race of the accusations made by the Dragon God and Demi-humans in Chrono Cross. They may be the progeny of Lavos, but they retain free will.

Signs point to another overarching storyline that involved Serge binding with the Time Devourer itself; in this scenario, Serge, if he did not defeat the Time Devourer with the Chrono Cross, would ultimately bind with it and cause the Devourer to mature, granting him the power to consume space-time. Chrono Cross Ultimania mainly supports this notion, claiming that the Arbiter of the Frozen Flame must mediate between his fellow lifeforms and Lavos, or else he will inevitably bind with the creature and spell destruction for other humans. Ultimania also postulates that Schala was an Arbiter of the Frozen Flame while it existed in Zeal, and that is how she came to bind with Lavos. Apparently, the Time Devourer needed enough power before it could reach maturity, and Serge would have been the final piece in the puzzle. Quotes in the game also seem to hint at this possibility; three come to mind specifically. A demi-human in [[Marbule] states that "anyone who touches that Flame will become a different being." Lynx, at Viper Manor, warns Serge that "there shall be a deep enmity between you and the world" once destruction occurs. Lastly, Belthasar notes that the Arbiter will gain "extraordinary powers...by binding with the new seed of destruction, the Devourer of Time." However, this storyline is not directly stated or implied in Chrono Cross, and neither has series creator Masato Kato confirmed it himself. For the time being, it remains speculation made by the Ultimania authors. Considering that in the same book, they contradict other canon (such as stating the Prometheus Circuit is not Robo, when Masato Kato noted that the circuit is Robo), the veracity of Ultimania is arguable.

Chrono Trigger DS reveals that Schala and Lavos, before becoming the prototypical Time Devourer, experienced an intermediary evolutionary stage—the Dream Devourer, capable of feeding on thoughts, memories, and dreams across time. Magus located Schala and tried to free her to no avail. Schala awoke long enough to tell Magus that his attempts were futile, and no power could be used to save her. She admonished him to live out his life in other pursuits before the Dream Devourer would destroy everything. Magus protested but was sent away, and eventually sacrificed his identity in abject frustration over Schala's fatalism and predicament.

In Radical Dreamers, Lavos is referenced alongside the Frozen Flame: "It descended from the heavens long ago, part of a huge meteorite." Magus also considers Lavos as a host for Kid's soul during one of the endings for Kid and the Sunflower.

Theories concerning Lavos are collectively organized at Lavos - Points of Interest. The special chronology of a member of the Lavos species is presented there as well.