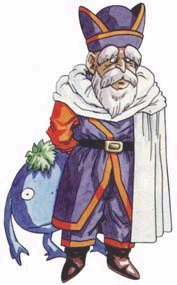 
Belthasar is the Guru of Reason from Zeal, architect of the Blackbird and Epoch, and an assistant to Crono's quest to save the world. In his heyday in the magic kingdom, he designed the Blackbird and Ocean Palace and was very respected among the people of Zeal. In the Lavos Timeline, he attended the Ocean Palace's christening and was thrown to 2300 A.D. in the Ocean Palace Incident. With his Nu assistant, he lived out the rest of his days in loneliness. He first built the Keeper's Dome and possibly several Sealed Doors. He finished the Wings of Time and set up the Poyozo dolls that would later help the heroes of time in their effort. Though he intended to use the Epoch to return home, he felt death approaching before he could succeed. He then succumbed to the onset of insanity due to his solitary existence in the Keeper's Dome, and copied his memories to the Nu assistant. The party gained use of the Epoch, which was later recognized as one of Belthasar's projects by Dalton and outfitted with wings for misuse. With Belthasar's aid, Crono's friends surmounted Death Peak and saved Crono from the new Ocean Palace Incident in the Keystone Timelines.

Belthasar's dialogue suggested a quick, jovial wit. There is a common misconception regarding his lines in the Keeper's dome about missing Schala's presence and climbing Death Peak. Fans sometimes believe he's saying that Schala is in the future, and wants to ascend the peak. This was clarified by the Retranslation; he's definitely reminiscing at first, then warning Crono's party of Death Peak's danger.

In the saved future, Belthasar entered a version of 2300 A.D. where human civilization had continued developing to a futuristic stage of technology not unlike that once possessed by the Kingdom of Zeal. He soon learned of Lavos's new incarnation, the Time Devourer. Determined to save Schala and destroy the Time Devourer, Belthasar planned out the events of Chrono Cross in excruciating detail in order to get Serge to travel to the Darkness Beyond Time. To this end, Belthasar engineered both the supercomputer FATE and his Neo Epoch, a one-seat time machine powered by antiprotons. He also convinced Robo to help the plan by becoming the Prometheus Circuit. Belthasar's nigh-on-supreme intellect and his ultimate goodwill are clear in these actions. Still, his tactics are strikingly megalomaniacal; to accomplish Project Kid, he manipulated the lives of thousands and controlled history for his own ends. This suggests that perhaps Belthasar's insanity in Trigger has its root in mania.

Babylonian name given to Daniel in the Old Testament of the Bible.

Belteshazzar is a Babylonian name meaning "Beltis protect the king." Beltis is a form of Bel (AKA Baal), who was the most clever deity and sage of the gods.

In regards to Bel (aka Baal)... it is a very generic title, actually. There was no one god "Bel", as such. The name means "lord". Thus even the Isralites would have called their god "Bel"; the Babylonians, after having 50 names for their top god Marduk, finally settled to simply calling him "Bel". Baalzebub, means "lord of the flies", for example.

Belthasar (or Belerizzar, or Belteshazzar, etc) was either a king of Israel or a Neo-Babylonian king near the end of the Neo-Babylonian era when the Israelites/Judeans were permitted to go back to Judah. Belthazzar was the son of Nabonidus. He was installed as ruler of Babylon at a young age, after his father decided to move to Teisa after becoming fed up with his discontented populace. A few years later, the Persian empire came knocking, and both Nabonidus and Belthazzar were killed when the Persians took Babylon. -Ancient Near Eastern History and Culture (W.H. Stiebing, Jr).

In the opening of the Book of Daniel, Nebuchadnezzar is impressed with the wise men of Israel/Judah. In this translation, Daniel is given the name Belteshazzar:

Daniel 1:7 The chief official gave them new names: to Daniel, the name Belteshazzar; to Hananiah, Shadrach; to Mishael, Meshach; and to Azariah, Abednego.

Nebuchadnezzar later has a nasty dream and decides to condemn all of the wise men in the city to death -- including his newly appointed Judean advisors. Daniel won't stand for this, so he asks God to cook up some divine inspiration. God shows Dan what the dream meant, Dan explains it to Neb, and Neb decides to give Dan a promotion. At this point, it almost sounds like Dan is the king of Babylon, which implies that the Judean prophet and the Neo-Bablyonian king that we've been discussing are actually the same person. Hold that thought.

Daniel 2:48-49 Then the king placed Daniel in a high position and lavished many gifts on him. He made him ruler over the entire province of Babylon and placed him in charge of all its wise men. Moreover, at Daniel's request the king appointed Shadrach, Meshach and Abednego administrators over the province of Babylon, while Daniel himself remained at the royal court.

Later, Neb goes ape-nuts and decides to leave Babylon. His son, King Belshazzar (notice the distinct spelling in this translation) assumes the throne. Belshazzar invites Daniel, or Belteshazzar, as he is known, to a feast.

Daniel 5:1-3 King Belshazzar gave a great banquet for a thousand of his nobles and drank wine with them. While Belshazzar was drinking his wine, he gave orders to bring in the gold and silver goblets that Nebuchadnezzar his father had taken from the temple in Jerusalem, so that the king and his nobles, his wives and his concubines might drink from them.

Daniel works his dream-magic and impresses Belshazzar. Belshazzar gives Dan another token promotion. This implies that Daniel (Belteshazzar) and King Belshazzar of Babylonia are very different people :D. Belshazzar doesn't stick around too long, though, as King Cyrus shows up and steps rather firmly on his neck. The Medes are given control of Babylon, and things deteoriate rather rapidly after that:

Daniel 5:29-31 Then at Belshazzar's command, Daniel was clothed in purple, a gold chain was placed around his neck, and he was proclaimed the third highest ruler in the kingdom. That very night Belshazzar, king of the Babylonians, was slain, and Darius the Mede took over the kingdom, at the age of sixty-two.

Thanks to Daniel Krispin

Belthasar, Melchior, and Gaspar are three wise men who brought gifts of gold, frankincense and myrrh to the infant Jesus according to legend.

The following is from the afterword of the book "Lamb" by the author Christopher Moore. The novel itself is a work of fiction, but it is based on some truth. Moore did extensive research of both the Gospel and the Bible as a whole before writing. Here's what he says:

"Another Gospel misassumption is that the three wise men were kings, or, in fact, that there were even three of them. We make that assumption because there are three gifts given to the Christ child. Their names are never mentioned. The names Balthasar, Gaspar, and Melchior come to us from Christian tradition written hundreds of years after the time of Christ." (pages 442-3)

When the Catholic church committed those wise men to sainthood, they did so with the names Melchior, Gaspar, and Balthasar. There's no actual record in the primary sources, but all three names were canonized together at a much later date.

A couple of centuries after the Gospels were written (say, 7th or 8th century), though, the names Gaspar, Melchior, and Balthazar were traditionally used to describe the three wise men. Perhaps people were trying to "boost" Jesus' image by showing that royalty from the three major world powers were visiting him -- Balthazar would obviously have been a Babylonian name at the time, while Gaspar/Caspar would have been Persian and Melchior would have been Arabian.