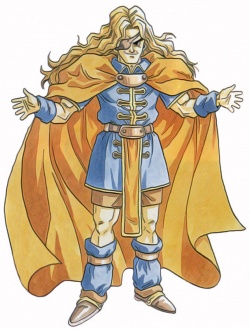 Dalton is the ambitious and egotistical antagonist of the world of Zeal. He is the commander of Zeal's security forces (known as the Dalton Corps) and is an aide to Queen Zeal. The name "Dalton Corps" was omitted from the English translation of the game. He is a ruthless and maniacal foe who craves power and has little regard for human life. Like Kefka in Final Fantasy 6 (although not quite as crazy), Dalton delights in taunting and torturing his enemies, and gets involved in comical situations in which he's usually the butt of the joke. While the exact details of his rise to power are unknown, he is a cruel commander to his underlings, ridiculing them and undercompensating them for service. Queen Zeal placed Dalton in charge of the Ocean Palace's construction after Belthasar's disappearance in the Keystone Timelines; he used slave labor from the Earthbound ones. The Prophet later edged him out of this position, placing him in a typically bad mood. He soon diverted his attention to the Blackbird, as he was now in charge of its security. His second encounter with Crono came in Zeal Palace, where he first demonstrated his close ties to a group of Golems whom he summoned to fight his battles for him (he is a magic innate, despite not wanting to soil his hands in battle himself).

He later met the party again in Algetty, where he kidnapped Schala after the party rescued Melchior from Mt. Woe. He took her to the Ocean Palace (where he was to serve guard duty), threatening to kill her if the party pursued. Soon feeling Lavos's energy, he decided to flee the palace for fear of his life (in the Lavos Timeline, he presumably stayed behind and perished in the Ocean Palace Incident). After the Fall of Zeal, he arrived in the Blackbird and declared himself king of Last Village and the other survivors. He confronted the party, underhandedly distracting them by yelling "what's that?!" before knocking them out. He then kidnapped the heroes of time, who had to break out of the airplane unassisted. While they escaped, Dalton interred the Epoch and commissioned the building of wings and lasers, giving it the title of his airthrone -- the Aero-Dalton Imperial. Ownership was returned to the party after he accidentally fell into a portal he was using to summon Golems while riding the machine.

Dalton's use of "what's that!?" (comparable to Marty McFly's use of "WHAT THE HELL IS THAT!?" against Biff in Back to the Future) was botched somewhat in the English translation.

Some believe that Dalton had a hand in the Fall of Guardia, as a long-haired assailant is depicted killing the Kingdom of Guardia's last defender in a cutscene in CT PSX. Masato Kato did say that Porre had help outside of normal time. This suspicion was confirmed in Chrono Trigger DS. It's very possible that Dalton is still active as "Porre High Command" during the events of Chrono Cross, as Porre is consistently militaristic and searches for the Frozen Flame, an artifact that Dalton may have special knowledge about from his history in Zeal.

After his defeat atop the Epoch, Dalton fell into a Golem-summoning Gate that deposited him in the Dimensional Vortex, a collection of lost time fragments jammed together in temporal instability. He drew up plans for revenge against Crono's group, who he felt denied him his kingdom and status as ruler over the age of antiquity. He then left the Dimensional Vortex, probably to a year predating 1000 A.D., and raised an army to overthrow the Kingdom of Guardia in 1005 A.D. He may have been the one who slayed Guardia's last defender, and stole the Masamune. What became of Dalton after this is unknown; the corrupted Masamune was somehow escaped his grasp an was found by Radius and Garai in Chrono Cross.