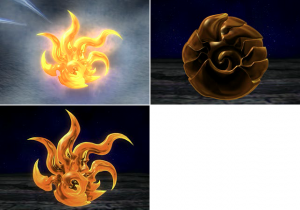 The Frozen Flame is a piece of Lavos that separated from the whole during or after 65000000 B.C. Somehow, it retained a kind of sentience, able to serve as a communicator between Lavos, deep inside the planet, and beings on the outside crust. It also was imbued with magical power, the full extent of which is unknown. It is considered the "essence" of Lavos, and contacting it is analogous to communicating with the creature. In approximately 3000000 B.C., Early Humans made contact with it. Lavos communicated an evolutionary protocol through the Frozen Flame that evolved them to full Humans, giving them the biological foundation for the use of magic. The Frozen Flame was then probably used in the kingdom of Zeal, and played a role in its destruction. After Lavos destroyed Zeal, the Frozen Flame passed into legend as the greatest treasure of the world, capable of granting wishes and imparting immortality. It presumably lay untouched until 2300 A.D. in Keystone T-1, when Belthasar located it and installed it in Chronopolis as its primary power source. After the Time Crash occurred and Chronopolis was thrown in the past, the legend of the Frozen Flame spread among the new inhabitants of El Nido.

The legend described the Dragon God's sealing the Flame, a great evil, in the Sea of Eden, when FATE had actually sealed the Dragon Gods up as the protector of humanity. FATE continued to rely on the Flame as its power source until 1006 A.D., when Serge was bitten by a panther demon. Schala caused a raging magnetic storm that blew him to Chronopolis, where the defenses were down; Serge then touched the Flame and became recognized as Arbiter by the Prometheus Circuit, which subsequently locked FATE out from accessing the artifact. His contact healed him and also corrupted the mind of his father, Wazuki. Intent on reestablishing access with the Frozen Flame, FATE shaped his father's mind and gave him the directive to kill Serge in 1010 A.D. This succeeded, allowing access once more; however, in 1020 A.D., Kid traveled back in time and saved him, causing the dimensions to split. Serge once again retained Arbiter status, even across dimensions. Meanwhile, the Sea of Eden in Home World reflected the fate of that dimension's future—destruction.

It became the Dead Sea, though the Frozen Flame still lay buried in it. Lynx then used the legend of the Flame to goad Porre and the Acacia Dragoons to play into his plan; he succeeded when the Dragoons took up residence at Fort Dragonia and he switched bodies with Serge, allowing him access to the Flame. Porre had an explicit goal of finding the Frozen Flame, likely because Dalton wanted it and was still in command of the nation. Serge attempted to retrieve the Dead Sea's Flame in Home World, though FATE exploded the entire area before he could gain access to it. Serge then challenged FATE directly at Chronopolis, defeating the supercomputer and nullifying the defenses of the time fortress. The Dragon God then reunited and stole the Flame, taking it to Terra Tower (possibly using it to raise the tower itself).It was then set atop a pedestal at the tower's top. After Serge battled the Dragon God, he approached the Flame, which seemed to radiate in light and engulf him. He escaped with his party; the fat of the Flame here is unknown. Belthasar or Serge may have taken it, or it may have been left atop Terra Tower.

It is important to note that there is a distinct possibility that the humans came into contact with Lavos, and not the Frozen Flame, for evolution to take place. The term "Frozen Flame" and several other descriptors are interchangeable with Lavos, making hard facts on the Frozen Flame's origin tough to pin down. It may be possible that the Frozen Flame was splintered off during Lavos's defeat, or perhaps an event in 12,000 B.C. The Compendium sticks with the prehistoric splinter idea since it hasn't caused any problems, but the alternate possibility of a later split definitely exists. Chrono Cross Ultimania merely asserts that it came to existence at some point in the ancient past. More will come with better Ultimania translations.

The Frozen Flame is a piece of Lavos that separated from the whole during or after 65000000 B.C. Imbued with special powers, and glowing bright scarlet, it passed through the epochs until arriving in the hands of the people of Zeal. According to Magil: "Once, there lived a people who sought to harness its power, hoping to tap into their yet unknown potential. And so, it became a treasure of great importance and dreams." The Flame eventaully effected the fall of Zeal, and was lost until presumably the Kingdom of Guardia located and stored it. There it was kept, as legend surrounding it grew; it was said to have special powers, including the ability to grant eternal life to its bearer. Whether it could accomplish this was unknown, as it was kept secret until the Fall of Guardia, in which it was stolen and taken to Viper Manor presumably by General Viper. Legend of it intensified, until the aristocrat Lynx heard of it and traveled to the manor to befriend General Viper and get closer to the Flame. He orchestrated a coup, slaughtering the Acacia Dragoons in the process and securing the artifact. About this time or prior, he learned that the Frozen Flame, when used in conjunction with a Time Egg, can allow the user to control history at will. Prior to this, Lucca asked Kid to acquire the Flame and set it on an old friend's grave (most likely Crono's). He sought out Lucca's old Chrono Trigger (which had not been used to save Crono in this dimension, presumably), and ended up killing her though failing to get the egg. He then waited for Kid to return to the manor and seek revenge upon him for Lucca; he confronted them on the night of Le Trésor Interdit, but was thwarted by the Porre army, who subsequently took the flame.

It is possible that the Frozen Flame was used in the Mammon Machine at Zeal; this explains its close proximity to Schala after the Ocean Palace Incident, and also how it caused Zeal to fall. However, no direct evidence exists to confirm this.