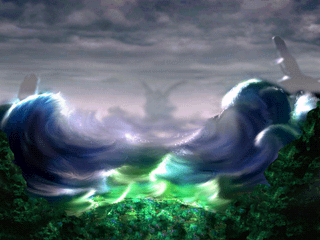 The Dead Sea is a temporal anomaly reflecting the ruinous future of Home World condensed to fit in the Sea of Eden. It was formed in 1010 A.D. after the dimensions split; the reason given is that since Home World's future is destroyed by Lavos, the Sea of Eden altered to reflect that state. The Ghost Children explained it as a timeline that was not supposed to have existed (one in which Lavos destroyed the world), but was somehow revived due to Serge. The nature of its existence is enigmatic; it contained several aspects of the future jammed together and frozen, including several city ruins. These consist of towers and broken hghways, and are littered with strange, ethereal phantoms that repeatedly walk defined paths. A building called the Tower of Geddon stood at the center. The architecture of this tower was a clongomeration of fused shards and pieces of other buildings; inside were the remains of a shopping mall and a theatre. Unsettling androids populated the area, and at the heart of the structure existed a strange distortion Gate. Beyond this lay a condensed Leene Square, frozen from the future; behind it sat the Frozen Flame of Home World.

After its creation in 1010 A.D., FATE installed Miguel to protect the Frozen Flame from any investigators who happened to make it inside the sea. Later, FATE decided that the Acacia Dragoons of Home World were a liability, and gave Lynx the imperative to dispose of them; he organized an expedition to the Dead Sea in 1017 A.D., and before it reached Leene's Square, all the Acacia Dragoons were frozen in place and phased out of normal time. This fanned the flames of the Dead Sea's legend in El Nido; it was feared by Demi-humans and Humans alike. The Dead Sea remained dormant for three years after, as the only other being who could obtain access was the Sage of Marbule, whose Fiddler Crab would open up Death's Door. When Serge crossed the dimensions in 1020 A.D. and struggled to know more about the nature of his death, he learned that he should seek out the Dead Sea in order to restore the dimensional distortion at Opassa Beach and facilitate crossing the dimension again. He obtained the Fiddler Crab and entered; there, he saw the Dead Sea's horrific scenery and made his way across the frozen waves, learning of Lithosphere Investigation Report #27 along the way and picking up a Medical Book and Prop Sword. While in the Tower of Geddon, he beheld visions of the Ghost Children, which ushered him on to the distortion.

There, at Leene Square, he found Miguel, who related that he had been guarding the Frozen Flame for ten years. The Ghost Children then appeared and ridiculed Serge for undoing their work and fating Home World to end in annihilation. Miguel then challenged Serge to exercise his will in defying FATE; a fierce battle ensued in which the party defeated Miguel, who afterwards lay with his back propped up against Nadia's bell. FATE then blocked Serge from reaching the Frozen Flame by effecting the destruction of the Dead Sea. As it collapsed, the Sky Dragon swooped in and saved Serge. At a hypothetical triangle's ends on the Dead Sea's map, three explosions erupted where the three Fates would exist in the Sea of Eden at Another World; these blasts ripped a curvy path leading to the Tower of Geddon, where they coalesced and caused a spherical distortion to rotate and consume the entire anomaly. Only water and three dimensional distortions remained after the cleansing was complete.

The Dead Sea arguably holds the status of being the most enigmatic and befuddling mystery of the Chrono series. Johnny also makes a small cameo, though not in his usual, happy demeanor; he is found dead in the first city ruins.

Geddon taken from the name "Armageddon". Armageddon itself is often, mistakenly, taken as the name of a day or a battle; it is, in actuallity, a real field of battle. As it says in Revalations "they gathered at the place called Armageddon". It is thought that this stands for Har Megiddo, or "the mountain of Megiddo". The plains of Megiddo fall at a very strategic point, and throughout history many battles have been fought there.