A sculpture of a fiddler crab with a claw that shines like a blue jewel. Said to be able to control the tides.

The Fiddler Crab is an enigmatic item held by the Sage of Marbule and said to have the power to control the tides of the sea. It is not a real crab or fossil, but is a statue with a blue jeweled arm. It was given to Serge in order to open up the passage to the Dead Sea; it served no other function after this effort was completed. 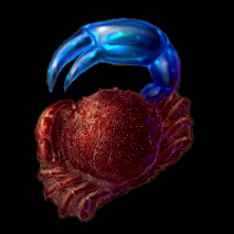