A Gate is a passage to another time period. The Entity, after being plagued by Lavos, created several Gates throughout the eras of time in order to facilitate its salvation by a hero named Crono. The Gates seemed to be small energy localizations able to expand to allow passage by Human-sized objects; a Gate Key was needed to enlarge it in this manner. On the inside, Gates appeared blue and wavy; once entered, the plane of time became a sea of energies. Gates allowed spatial as well as temporal travel, sometimes exiting halfway around the world from the correspondent entrance in the past or future. Most Gates also connected with one another, the exception being the one in the Proto Dome, which appeared to simply lead to the End of Time. Lucca once observed a special Red Gate while sleeping in Fiona's Forest after it had been revived; it took her to her house in the past, where she was able to save her mother's legs. Lastly, the Chrono Trigger itself was probably a self-contained Gate. The Gates created by the Entity closed after Lavos was defeated.

In the Chrono Trigger Prerelease, Lucca was to reach 990 A.D. through a special gate at the End of Time.

Researchers at Chronopolis elaborate on the science of Gates. 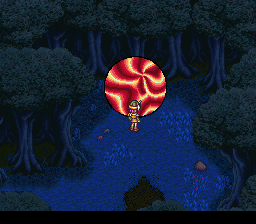