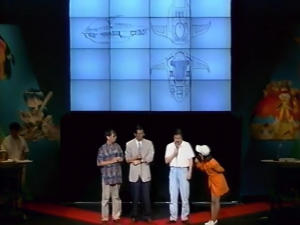 The Chrono Trigger Prerelease is an unfinished version of Chrono Trigger dated November 17, 1994. It was given to magazines and game retailers as a sample before Chrono Trigger's release to generate interest and sales. The Prerelease could not be played all the way through; barriers to passage were programmed in Guardia Castle, Lab 32, and the Magic Cave. Around 1999, someone ripped and uploaded the ROM; the Sonic 2 Beta was obtained in a similar manner.

The Prerelease provides a rare look into Chrono Trigger's development. It's full of things that were changed or dropped from Chrono Trigger's final release; we can only guess at what the developers intended in some cases. For that reason, it holds a special quasi-canonical position in the Chrono series. Fans can explore the game's many interesting areas (witnessing different enemies and items) by using codes or an Epoch savestate. This section of the encyclopedia exposes and classifies every important difference between the Prerelease and the final version, and its content structure mirrors the parent encyclopedia. Note that help was provided by The Cutting Room Floor, which has a mutual sharing agreement with the Compendium for proto stuff.

Thanks for browsing and exploring the Prerelease. Be sure to check out Alpha Version Screenshots and Videos, which contains a glance at an even earlier version of Chrono Trigger.