This is the actual cartridge probably released to professional game reviewers and magazines. It contained three savegames that allowed further exploration beyond programmed stop points. Additionally, once one plays the organ at the Cathedral, exits the Guardia Dungeon, goes throught the time warp at Proto Dome, or touches the savepoint that appears after defeating Slash and Flea in Magus' castle an ending forecasting the final release of Chrono Trigger plays.

The manual has been translated by Lina Darkstar.

Pg. 1
Super Famicom is a trademark of Nintendo.

Pg. 2
- After the title screen ends, if no operation is taken for awhile a digest of names and places in the game will pass by. Please use it as a demonstration for your store.

This Super Famicom cartridge is a sample edition for storefront demonstration purposes. Because it is different from the product edition, please acknowledge that its function is limited before selling.

[] How to Start the Game
(1) After the title screen, no matter what button is pushed the [Save Screen] will appear.

Pg. 4
(2) Please select [New Game] and confirm with the A Button. The game will begin. (Other than [New Game] it is also possible to select previously entered save data.)

(3) The character name input screen will appear. After the desired name is entered, please push the Start button. It will be the same for characters appearing after this.

(4) When moving about on the world map, when an indicator appears above a collision with a building or forest, it is possible to enter within by pushing the A button.

(5) In the first town that appears there is a house called the "Mayor's Residence." In here beginners will recieve explanations of operations and equipment.

Pg. 5-6
[] About the Menu Screen
- The menu screen can be called up anywhere by pressing the X button. Please select icons with the cross button and confirm with the A button.

-There are six icons in all (from the left)
Status & Equipment Icon
With the cross button each character's status can be seen. Press the A button there and it will become the equipment screen.
Item Icon
Align the cursor with the item you wish to use, and press the A button twice. In the case of a recovery item, choose who is using it with the cross button, and confirm with the A button.
Tech Icon
With up and down on the cross button each character's "Techs" can be seen, and with left and right "Combo" techs can be seen. The "Tech" shown in grey is the next tech to be learned, and the number is the necessary "Tech Points" needed before it is learned.
Config Icon
Each part of the setup can be changed.
Exchange Icon
Change the characters in the party.
Save Icon
Data cannot be saved in the sample edition.

[] About Battles
-Talk to or encounter an enemy character and a battle will begin.
(1) The battle window will open. When the wait gauge to the side of the character names becomes full choose one out of "Fight" "Tech" ("Combo") and "Item."

Pg. 7-8
(2) Select "Fight," and you will attack with your equipped weapon.
(3) "Techs" are learned by each character when a fixed amount of "tech points" are acquired in battle. "Combos" are combinations of "techs" the characters have learned that can create stronger attacks.

- Choose "Tech" and the available techs will be shown in the window. Choose a tech with the cross button and confirm with the A button.

- If more than one character waits for their command input, the "Tech" command will switch to the "Combo" command. Now scrolling down in the window past "Two-person tech" or "Three-person tech" will show "combo" techs.

- The following conditions are required to use "Combo" techs.
(1) All characters using techs are waiting to input commands.
(2) Each character has the necessary MP to use their tech.
(3) Choose "Item," and the useable items will appear in the window. Choose the item you wish to use, and the character you wish to use it on with the cross button. (Translator's note: This appears to be a case of confusing formatting.)

[] About the Map
- Movement on the map is carried out entirely by the cross button, but press "Select" while moving about on the map and the world map will appear. The B button returns to the original map. 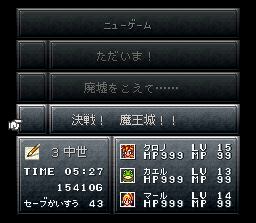 Thanks to RyogaMasaki for these pictures

From: Chrono Trigger Prerelease
From: Merchandise