Masato Kato video interview on Another Eden and Chrono Trigger

Magus_Brokenhart
What was that about Another Eden having nothing to do with Trigger? In this interview that just came out yesterday he says that he is indirectly writing the story from the perspective of the future heroes from the erased timeline. Like he was doing the opposite of Chrono Trigger and having people from the future having to fix the changes time travelers from the past make.

Hell, with him not expecting to finish the trilogy Another Eden is as close as we are going to get.

Ema
Was scrolling through Twitter this morning and found this piece of artwork I've never seen before. Seems to come from a book related to the anime cutscenes. Would love to see more of this 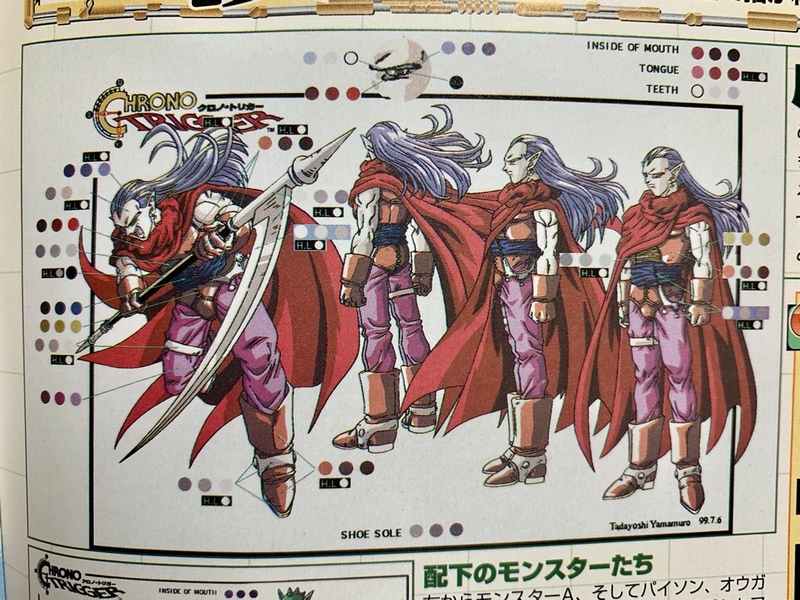 [UPDATE]
Post has been updated with more images!
Read More

Good Smile Company released this picture a while ago of a prototype of a Crono figure!

I know its...foolish to get excited at this point for anything to come out of this but...a man can always dream T_T

Fauntleroy
Hi, everybody! Version 2.1 of the Schala Edition hack is now available!

I've also submitted an update to the project's page on Romhacking.

2.1 is a mild cleanup of 2.0, correcting typos and addressing many bugs reported by users. The primary game content remains unchanged from 2.0.

First-timers, be sure to use the "Chrono_Trigger_(U)_[!].smc" version of the base ROM.

I'd just like to thank the community here again for its support while I worked on the project throughout 2019. It wouldn't have happened without the Compendium.

This is the translated interview from 'Más allá del tiempo' ("Beyond time") to Masato Kato.

I didn't translate the introduction as there is nothing really new there, just a few lines for those who don't know who Masato Kato is.

I was falling sleep at the end (just in case I have some mistakes).

I hope you enjoy it.

ZeaLitY
We acquired this video via Yahoo Japan auctions last month. It's a VHS tape that would've played on repeat in a video game store, showing gameplay from Chrono Trigger and Front Mission. The Chrono Trigger portion seems to have been recorded using the Prerelease build, or possible a build in between, as it contains the Prerelease version of the Lavos eruption sprite. The only other interesting part I caught was the exploration of Magus's Lair—the party finds Magus, but the battle doesn't start (obviously this event was disabled; can't recall if that's how it is in the Prerelease as well).

The most exciting find with this tape, however, is that it plays A Premonition, Chrono Trigger, Secret of the Forest, and Battle 1 as they would've originally sounded before downsampling/conversion to Super Famicom/SNES hardware. These versions are potentially how Yasunori Mitsuda and Nobuo Uematsu heard them before they were placed into the game. Check them out! Also check out the Front Mission video if you're a fan of that series; I sadly don't know enough about it.

Big thanks to Hidden Palace for alerting me to the auction.
Read More

ZeaLitY
Lots of exciting stuff below, but as a result of this update, Material Requiring Translation is starting to break the bank. If anyone has contacts or ideas for getting translation assistance, please reply. Even if we have to death-by-a-thousand-papercuts this thing, it'll be wonderful to start getting some steady, even if microscopic progress. How many secrets still lay in wait for English-speaking fans?! (Also, the albums and doujins update will take longer—VGMDb enabled viewing all works attached to a particular franchise at some point in the last few years, and apparently we're missing like 300+ different fan arranges in the encyclopedia. Life is pain.)

[PRERELEASE]  A truly massive update has taken place on Alpha Screenshot Page, the tragically-named repository for prerelease screenshots! We've combed all the great recent scans on Twitter and have expanded and reorganized the page to index them all; check it out!  [MOCKUPS]  Reld has done some fantastic investigative work into the early screenshots and mockups! First, check out recreations of some of the more interesting mock-ups featured on the Alpha Screenshot Page, near the bottom. Second, check out the V-Jump video section—there is now a discussion on the probable name of the bridge shown on the overworld. I'd never even realized those Prerelease tombstones had been used on the bridge's field map!  [VIDEO]  Cabbusses's Retro Obscurities has also put up a backup of the Brut Press Volume, December 1994 coverage of Chrono Trigger as well; find it on the page under the Video section!

[TRANSLATION]  Shea Melvin has graciously translated the V-Jump video special on Chrono Trigger! The interview features most of the main developers (including Akira Toriyama) hyping up the game, with most of them talking about the capabilities of the 32 Megabit cartridge. Many thanks to Shea for this; check it out here.  [CE]  trig has rescued the old Youtube annotations from the Crimson Echoes Memorial playlist; grab them here.  [CT TRANSLATIONS]  But that's not all! Turkish, Spanish, Catalan, and Polish translations of Chrono Trigger for SNES have been uploaded here.

[ENCYC]  Many miscellaneous updates have been made, but chief among them are Mauron's contributions to the Chrono Trigger monster pages, which now list accurate weakness/resistance percentages to elements, as well as stamina stats (though most are 10). A page has also been added for the unused Magus enemy. Check it all out here.  [REFERENCES]  ForTex brought us the news that Another Eden made a field map of a beach that pays tribute to Opassa Beach, from Chrono Cross. Check it out here.

[CROSS HACKS]  Remi Negest made a patch to fix the Pip element grid issue. Note, it only works on savegames before the glitch has been triggered. Download it here.  [2]  Prizvel has made a patch to restore the Wraith with Ghetz's shirt to the Viper Manor sewers; grab it here.  [CT MODDING]  TheMage and Mauron have brought us this wonderful sprite insertion guide!  [2]  Mauron's made some significant updates to the Tech Data Notes page, as well as Menu Data. Also check out Vehek's PSX research here!  [3]  Likewise, we now have a guide on adding the last few enemy offsets as functional enemies! Find it here.  [4]  Plugin updates! HiTech 32 - The Rest (also updated/uploaded to the static webhost)

[REMIXES]  First up is OCReMix, but too many remixes have come out since 2016 to list individually here—hit up these chronological CT and CC pages instead: Chrono Trigger, Chrono Cross. (Don't worry; they've still been added to the encyclopedia.)  [DWELLING OF DUELS]  [ 'Wings that Cross Time' by sigmabeta ][ 'Trial and Errors' by Soniferous ][ 'Singing Mountain' by newip ][ 'Omen of Antiquity' by Careless Juja, Brandon Strader ][ 'Atlantis Burns Under a Lunar Eclipse' by Rifftus ][ 'Queen Zeal's Bedroom' by Team Pixels ][ 'Tango in the Sewer' by Hat ][ 'Time - Lavos - Chance (original - Moiré Effect)' by Katamari
[ 'The Secret of the Forest' by Ian Martyn ][ 'Jonny Races FATE Down Under' by Ian Martyn
[ 'Far Promise - Dream Shore' by Somewhere in Time ]  [CELESTIA]  [ Confrontation with Magus' by scare96 ][ 'Corridors of Time' by lookers-on ][ 'la nostalgie du vent -from Chrono Trigger-' by hiyama ][ 'Prayers Arise' by lix ][ 'Earth Dragon's Isle' by voile ]

That's all for now. Pop into the forums to see what else you may have missed! And check out that bLiNd Chillopolis WIP in the remixes above; just incredible!
Read More

Vehek
Something I stumbled upon while doing some research on a completely different Chrono-related topic.

Besides the image above, these are the scenes I don't recognize from either the ones collected on this site or the V-Jump scans I linked to last year.

[時間移動に関係あり？の不思議な部屋]
[Is this related to time travel? The Wonder Room]

ここで神秘的な雰囲気をもつ、３つの部屋を紹介しておこう。ないかが転送されているように見えるけど、現時点でなまぅたくの謎だ。ゲーム上，重要な場面かもしれないぞ。
Here are three rooms with a mysterious atmosphere. It looks as if it's a transporter, but that's a complete mystery at the moment. This could be an important scene in the game.

*床の形からすると、３つは別々の部屋にがんじ感じるけと、同じ部屋での連続した場面にも見える。
From the shape of the floor, it looks like there are three separate rooms, or a series of scenes in the same room.
*中央の物体には、目や口らしきものが見える。ちょっとグロテスク。
The central object appears to have eyes or what appears to be a mouth. It is a little grotesque.
*見れたのはモンスターらしい。少なくとも人間ではなさそうだ。敵か味方か？
What we can see appears to be a monster. At least it does not appear to be human. Friend or foe?
Translated with www.DeepL.com/Translator (free version)

Kodokami
I don't think this has been shared yet, but there's a kickstarter currently on-going (with 5 days left!) for a collection of piano arrangements from Chrono Cross! Check it out here.

I am really debating with myself over that music box...

The Release of a Chrono FPS -- Chrono Trigger: Reptite Rage

Boo the Gentleman Caller
In an exciting late 2019 gift, our good friend Doc_Cigarette has given us yet another Chrono FPS game! A sequel to his fast and furious Crimson Cold War, this new title, called Reptite Rage, offers roughly 37 levels of SNES-era FPS fun.

Pick it up here!
https://www.dropbox.com/s/cfuh5ne4htngaqn/ct2beta.zip?dl=0

And make sure to try out the first game in the series: Crimson Cold War!
https://www.dropbox.com/s/falkuy1y3icyo6o/ChronoTriggerCCWv0.5.zip?dl=0