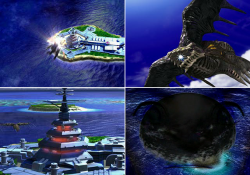 Chronopolis is the time research installation created by Belthasar in 2300 A.D. and responsible for the execution of Project Kid. It was founded after the Guru of Reason came in to the future from the Ocean Palace Incident and made the Time Research Lab. Belthasar sought funding from the Central Regime; he managed to convince them to establish the project under the guise of a military research facility. He then located the area in El Nido due to the strange gravitational field there (probably caused by the Frozen Flame). The Flame itself powered the new building, and was stationed in the basement where a huge, power-extracting and analyzing engine made several connections with it. To officiate and regulate the facility, a somewhat sentient supercomputer known as FATE was constructed out of existing Mother Brain circuitry; like the other systems, it drew power directly from the Frozen Flame. FATE was equipped with a huge repository of historical knowledge dating back to prehistory, allowing it unparalleled computing power. Above the ground level, which included a lobby, janitorial system, and admissions desk, four floors were constructed to house various experiments on physics and other fields of science, such as biology. To conduct these ventures, the scientists were given state of the art imaging tools and other apparatuses. For defense, automated robots were set to patrol the corridors, and a crew of fighter jets stood ready for air superiority. Lastly, the facility's location allowed it to be hidden from public view; this required due to the secrecy and importance of Chronopolis's work.

Once the systems were up and running, Belthasar assessed his bearings in time, and learned that Schala had been bound to Lavos, forming the Time Devourer, and that the resulting being, once matured, would consume all space-time. Probably with the help of FATE, Belthasar drew up an elaborate plan to create a device known as the Chrono Cross that could free Schala from the parasitic creature. He decided to use Chronopolis as a magnificent instrument to this end; the institution would travel back through time, create and populate islands, and indirectly allocate the necessary factors needed to create the Chrono Cross. While pinning down the specifics of Project Kid (possibly with help from correspondence with Lucca), he installed Robo as the Prometheus Circuit, a device intended to lock access to the Flame out if anyone were to touch it and become its Arbiter. He also constructed the Neo Epoch, a time traveling machine he would use to watch his plan unfold. FATE was not privy to Project Kid's full scope. Once ready, Belthasar announced the Counter-Time Experiment, an effort to use the power of the Frozen Flame to master control of time. He made preliminary preparations, and ensured that the organization would continue the experiment in his absence. He then departed for the modern era, leaving the Chronopolis Chief behind as curator of the facility.

The Chief continued to prepare for the Counter-Time Experiment; though he feared both the repercussions of the project failing and succeeding, he nonetheless felt it was imperative to push on. In 2400 A.D., the experiment took place; specifically, research group 3B released the Flame's lock-level to D in order to trace the counter-time effect. As planned by Belthasar, the resulting catastrophe phased Chronopolis far into the past of 12000 B.C. Lavos, awoken in the Ocean Palace disaster, used the Frozen Flame in the facility to do this in hopes of mucking with the timeline. Dinopolis was shifted in to the Keystone Dimension by the planet to counter Chronopolis's introduction into the past; once the staff of the time fortress became aware of their surroundings, they dispatched a force to deal with the Dragonians. The battle was soon won; FATE divided the Dragon God into six components and engineered Elements, derivate relics that could produce a natural effect when activated. FATE also aspired to construct its own paradise; though its primary objective was to not disturb history until the future came by not making contact with the Zenan mainland, FATE drew up a plan that would allow it to create its own civilization and preclude any outside contact. It terraformed the archipelago of El Nido and selected several staff members to populate the islands. FATE also devised a system of manipulation over the island's future inhabitants; called the Records of FATE, these machines could rewrite personality and memory when accessed, ensuring that FATE would dominate the lives of its people. The population it had selected was then wiped clean of its memory and dispersed throughout the islands; the Dragons too were stationed in six areas around El Nido. Content, FATE allowed the new culture to grow for the next few thousand years. Chronopolis meanwhile continued to be staffed by a skeleton crew of apparent "ghost" workers.

Chronopolis erstwhile hid in the Sea of Eden by causing coral around the sea to become instantly fatal upon contact. It also employed a defense system allowing it to be submered under a huge, triangular column of water. It enjoyed peace until 1006 A.D., when a boy named Serge was wounded in Arni. His father, Wazuki, aimed to take him to Marbule to be healed, but as planned by Belthasar, Schala heard Serge's cries across time and caused a magnetic storm that shut down all Chronopolis's defenses and blew the father, Miguel, and Serge to land at Chronopolis. There, the Frozen Flame called to the boy and subsequently healed his injuries; by contacting it, Serge engaged the Prometheus Circuit, effectively locking FATE out from accessing its power source. The Flame also mentally corrupted his father, Wazuki; FATE seized upon this by attempting to control Wazuki for its own ends. The defense system also activated as the trio were leaving, and Miguel was imprisoned. Over the next four years, FATE repeatedly shaped Wazuki's mind to become more obedient and subservient; by 1010 A.D., Wazuki stood ready to kill his son, which would release the lock on the Frozen Flame. FATE recalled him to Chronopolis, where he was reshaped in the image of a panther demon. He was then given the directive to drown Serge, and accomplished this on Opassa Beach. Chronopolis reassumed its normal state of operations until 1020 A.D., when Kid traveled back through time to save Serge, effectively splitting the dimensions.

When Home World split off, the conditions of its future were shaped so that it would end in obliteration by Lavos, a reversal of Crono's quest to stop the beast. This resulted in Home World's Sea of Eden reflecting the ruined future; Chronopolis never existed in Home World, replaced by this vision of destruction. The Frozen Flame of Home World was duplicated and survived, however; to protect it, FATE somehow released and dispatched Miguel across the dimensions. FATE then predicted that in 1020 A.D., Serge would attempt to cross the dimensions to reach Another World. Capitalizing on this knowledge, FATE sent Lynx to manipulate Porre and the Acacia Dragoons in an elaborate plan to have Lynx switch bodies with Serge via the Dragon Tear. Lynx would then be able to enter the Frozen Flame chamber and restore access. Though Serge evaded Lynx in their first meeting, Lynx was able to complete the ceremony, and subsequently entered the chamber and imprisoned the Prometheus Circuit. Days later, Serge arrived in Chronopolis himself, having obtained the six Dragon relics. He found the ghost workers to be perpetually repeating the actions of their lives before the Counter-Time Experiment; he also located Grobyc's StrongArm technique. As he explored the laboratories, information concerning Lavos, human evolution, and time travel was related to him; he also found a new room built to compare and service either dimension. Serge then made his way to the Frozen Flame chamber; there, Lynx confronted him and had FATE dispatch the Prometheus Circuit.

Lynx then allowed himself to be reformed as another avatar of FATE, intended to battle Serge. This cybernetic form seemed to rise out of the ground; though it proved formidable in combat, Serge defeated it as well, effectively killing FATE. This left Chronopolis utterly defenseless; the Dragon God immediately swooped in and stole the Frozen Flame. The ghost workers vanished into thin air, though Chronopolis's electrical systems still functioned. Without FATE, however, the facility was simply a random assortment of futuristic tools and data. It served one more function, however, as its dock allowed Serge to outfit Korcha's Boat with the anti-gravity device provided by Starky. After this event, Chronopolis fell dormant, aside from the robot patrollers who continued to defend an empty institution. It is unknown if it continued to exist after the Unification of Dimensions.

The article Salt for the Dead Sea claims that Chronopolis will not exist after the dimensions are unified, though its effects in time will still be preserved. Please consult that piece for more information.

In some Chronopolis battle areas, a banner of scrolling text can be seen. It seems to say "kokoha evhal jkanno gunnjriyouwo okonatte imasu kanariyabai-----yo." Here's the texture used to accomplish this:

I'm pretty sure there are a few mistakes with this romanji. "Ha" should be "wa" etc., and "jkanno" makes about as much sense as "kwyjibo". Writing it as "koko wa evhal jkanno gunnjri you o okonatte imasu kanari yabai yo" makes it easier to read, but it's missing at least two vowels, probably three, and "evhal" isn't a word in any language I know of.

Extrapolating from the data a bit, I came up with: "koko wa EVIL jikan no gun no jiri you o okonatte imasu kanari yabai yo" which is a possible sentence and could be loosely translated as "There are evil agents of time carrying out calamities here; it's quite dangerous!". Someone with more knowledge about Japanese might be able to make more helpful progress in this area, but I thought I'd lend however much of a hand I could.

Lina・Takezawa, a Japanese user, then graciously contributed the following:

The message of the banner appearing in Chronopolis is in Japanese:

I think that will become in English:

Here is evhal. We are doing military use of time. It's terrible dangerous.