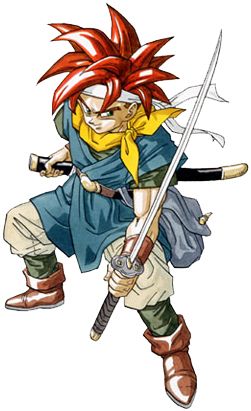 Crono is a fatherless teenager from the town of Truce and the protagonist of Chrono Trigger. He meets Marle at the Millennial Fair, and begins his adventure by attempting to rescue her after she is sent to 600 A.D. by the Super Dimension Warp. This leads to the Arris Dome, in which he, Marle, and Lucca discover the Apocalypse and pledge to prevent it. He is later venerated as a hero for saving Zenan Bridge and assisting in the defeat of Magus, and is revered by Ayla for his strength. In the Ocean Palace, Crono is killed while facing off against Lavos; his death is later prevented by his friends, who use a Time Egg (the first Chrono Trigger) supplied by Gaspar to remove him from the Palace and substitute a Clone. After the defeat of Lavos and the end of his quest, it is heavily suggested that Crono falls in love with Marle and the two are married; this is depicted outright in the ending cutscene of the PSX version. Little is known of his fate after this, as he was presumably involved in some incident in the Fall of Guardia.

An analysis of Crono's personality must be totally inferred from events, as he never speaks in the game. This does not mean he is mute; NPCs must hear him speak and he even has a line in the slideshow ending. Crono is believed to be a fearless hero, with bravery bordering on the line of foolishness. Ultimania states that he is a natural genius at swordsmanship and possesses an unbreakable will. Without a thought, he rushes to save Marle in 600 A.D. and sacrifices himself without hesitation in the battle at the Ocean Palace. This opens up character ambiguities; Crono can either be seen as a magnanimous, selfless defender of humanity, or simply a teenager with a hot streak of sword skills who takes a fast-paced, action-adventure ride and departs from his boring, normal life. In either perspective, his person is reinforced by the fact that the Entity apparently chose him as the leader of the effort against Lavos; and he certainly gets the job done, whether doing so out of unparalleled virtue or a need to assert his strength.

Massato Kato stated in his CT Ultimania interview that he and Yuji Horii intended for Crono to stay dead after the Ocean Palace scenario. The party would retrieve a version of him predating the Millennial Fair to complete the quest, and then return him to his home time, bittersweetly knowing he would go on to die at the Ocean Palace. Square deemed this too depressing and had them write the clone plot device to save him. Another development piece of trivia is that an early screenshot shows him equipped with "Father's Katana" (see gallery below).

Crono's fate is implied to in Radius's statement about the Kingdom of Guardia no longer being peaceful. Like Marle, he is very likely alive as referenced in Lucca's letter about her friends. A version of him appears as one of the Ghost Children three times. The first time, he states that the future in which Earth is ruined by Lavos is going to be brought back into being due to the interference of Serge, who caused the Home World and Another World split. The second time is in an illusory space at Terra Tower, in which Belthasar enlightens Serge's party about some of the affairs of the Dragons. Crono's final appearance in CC comes immediately before the final battle of the game. Crono tells Serge that Wazuki was turned into Lynx by FATE, and along with his fellow "ghosts," the other two members of the original time-traveling group, implores Serge to destroy Lavos once and for all.

Crono is thought to be Lucca's dead friend who shall receive the Frozen Flame as a grave adornment. Since Kid holds the Chrono Trigger Time Egg, Crono may not have been revived at the Ocean Palace.