Humans are the descendants of Early Humans, and came to exist after the latter made contact with the Frozen Flame in 3000000 B.C. This rapidly evolved the human brain, increasing its size and instilling humanity with the biological ability to use magic. The trait of magic was apparently recessive, with only a few individuals receiving the ability to use it. However, the nature of the trait allowed it to be discovered and expressed (for instance by Spekkio, who "brings it out" and effectively turns Crono's group into innate users). At the very least, those with an unexpressed trait can still leech power sources such as the Sun Stone and still wreak magical effects.

It is speculated in Chronopolis that because humans came about due to Lavos's touch, humans are in fact a foreign being to the planet and that the resulting contradictory nature of the human mind is responsible for humanity's inability to slowly progress its society in harmony with nature. The human brain was completely mapped after 2300 A.D., and its intricacies were exploited by Chronopolis using a device known as the Record of Fate to control the destinies of El Nido's residents. 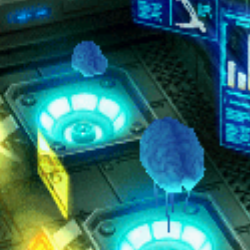