According to inichi, the Japanese Chrono Trigger speed run master:

The way I see it, it might combine "Sable" with "Saburo". Sable is a Japanese cookie. It often takes the form of a bird. such as chick and dove. Saburo is a popular name in Japan. As you may or may not know, most Japanese can't tell the pronunciation of "l" from the one of"r".That is, Sablow sounds like Saburo to most Japanese. So SABLOW is a proper name for Japanese to name a birdmonster after a person's name."

Thanks to Molotov as well 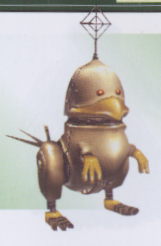