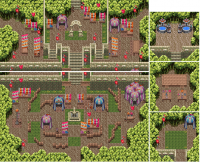 Leene Square is party and celebration central for the Kingdom of Guardia, and is the staging area for the Millennial Fair. Constructed after 600 A.D. to celebrate peace reached with the Mystics after the bloody war, its most prominent feature is Leene's Bell, constructed by Banta in the Middle Ages and set up at the center of the square. The Square subsequently became the finest example of the reigning peace between countries in 1000 A.D., and the Millennial Fair brought visitors from all cities to delight in the spoils of good will towards all. Vendors, shops, mini-games, and demonstrations were set up all throughout the fairgrounds, and visitors were allowed to dance and enjoy the occasion. By far, the most exciting event was the Telepod demonstration by Lucca, as it resulted in Crono and Marle's departure to the past and the beginning of Chrono Trigger. The fair finally culminated in the Moonlight Parade, in which the heroes were showcased, and returned to their separate times through a Gate near the Telepod.

Several events at the fair determine whether Crono is ruled completely not guilty, completely guilty, or somewhere in between during the trial at Guardia Castle. To get all "Not Guilty",

1. Race around the fountain

Four NPCs known as Steel Runner, Green Ambler, Catalack, and G.I. Jogger race around the center of the square in this betting game. Wait until they are all at the starting line, then talk to the man in the tent near them. He will ask you if you would like to bet on who shall win the race. Bet and then talk to him after the race is completed to receive your prize money of 20 Silver Points. If you repeatedly press 'A' while next to a racer, it will slow that racer down. An old man near the startling line will often give good hints on who will win the next race.

To the left of the race is a man with a bell. Talk to him and as you ready to hit the bell, press 'A' as you are farthest away from it. If the bell is rung, you shall receive 1 Silver Point.

Enter one area up and head all the way to the left, where you will come to a clearing with a singing robot named Gato in the middle. Challenge him to a fight and you may win 15 Silver Points.

On the opposite area of the fair from Gato's position is a man who challenges you to a soda guzzling contest. Press 'A' rapidly to down several sodas; enough will earn you 5 Silver Points. This game is especially easy with an emulator or turbo controller.

In the first area of the fair, enter a tent on the right to play three games that one must spend Silver Points to play. Prizes vary for each game.

For 10 Silver Points, one must guess which soldier is Piette after the three are shuffled around. If one wins, a Poyozo doll is placed in Crono's room. Upon examination, it plays the song 'Crono and Marle ~Far Off Promise~.'

For 40 Silver Points, one must mimic a clone of oneself using the controller. L corresponds to left Arm, R is right Arm, Y is laugh, and A invokes the character's surprised look. Upon winning, the player received a clone of the character used to win the game, which shall be sent to that character's dwelling.

Crono's clone is at his house, Marle's in her room, Lucca's in her kitchen, Frog's in his forest area, Ayla's in her tent, Robo's at the Proto Dome, and Magus' at the North Cape. This is a vastly important time to pick up the clone of Crono for reasons revealed later in the game.

C. Save the girl

For 80 Silver Points, one is able to play a game in which three monsters must be knocked back while a switch must be flipped to prevent an assistant from falling into a torch. One must have Marle or another character for this game. If the player wins, Crono receives a cat of the opposite sex of his current cat, and these will mate on the condition that you play the games several more times throughout Chrono Trigger to add cat food to a bucket in Crono's room. You can receive a maximum of 11 cats, the last looking like Alfador.

There is a set easy way to do this, but you must not waste any time. As soon as possible, rush forward and hit the middle trigger, sending that monster instantly to the back. Rush right and hit that, then rush left, then right, then left, and your next right rush shall eliminate that monster. Hit the left button two more times to win a second before the assistant is scorched. If you are extremely quick, you can eliminate one turn of rushing right and left.

Serge and his party return to Leene Square, as it is the final destination in the Dead Sea, and where Home World's Frozen Flame is stored. The layout of the first area bears a resemblance to the fountain used in Truce in the Chrono Trigger Prerelease on the 1000 A.D. overworld.