The Ghost Children are spectres of Crono, Marle, and Lucca that first appear to Serge in the Dead Sea. There, they accuse him of negating all their hard work to save the future and thwart Lavos. Miguel then cryptically dismisses them as echoes from ones far gone; they disappear with the destruction of the Dead Sea. They were next seen in Terra Tower, with Belthasar in the illusory Viper Manor library he created. The Crono ghost asked Serge whether he had the Chrono Cross yet, and noted that it could heal the dimensions. Later, before Serge made his final voyage to the Darkness Beyond Time, they appeared on Opassa Beach and amazingly revealed much information about Project Kid, Belthasar's planning, and Serge's ultimate purpose in using the Chrono Cross to free Schala from the Time Devourer. During the conversation, the Lucca phantom even interacted with Kid as if she were the genuine article. The children then ushered Serge on.

It's been proposed by Duke Serkol that they appear as children because of the difference between CT and CC's art styles. Fully rendering Crono, Marle, and Lucca in the Chrono Cross polygon art-style may have angered certain fans, but depicting them as children (or just in the chibi style) is akin to showing them as their original, cutesy 16-bit sprites.

The ghost children are a substantial enigma; each attempt to explain their origin has carried significant repercussions concerning other aspects of the series. For instance, if one believes them to be the real ghosts of Crono, Marle, and Lucca, it means that these three died before 1020 A.D. The problem of their existence was directly addressed in the Compendium article Salt for the Dead Sea:

One of the more interesting and disturbing aspects of the encounter with Miguel is the presence of the three ghosts that appear to be Crono, Marle, and Lucca. They are startingly antagonistic, blaming Serge for the future destruction of the Home World. How that has been accomplished has been explained already; we now can focus on the ghosts themselves, and ponder how and why they exist in the Dead Sea. Two theoriest exist on the subject:

The images of Crono, Marle, and Lucca are real ghosts that realize the quest they have memories of has been totally negated in Home World, and take it out on Serge, who has caused this turn of events. However, this does not account for their appearance as youth.

The Home World Dimension was created in 1010 A.D. when Serge survives, thus creating two Dimensions of Home & Another World. According to the Armageddon-Branch Theory the only Chrono that exists, exists in Another World, because during Chrono Trigger, that is the only dimension (up until the end of the DS credits).

According to the mechanics of the Time Crash Shift's unique type of time travel, it caused certain points in time to become part of the same region of other points in time. This explains why when the three Dimensional Vortices rip through into Another World (in the CTDS after credits) that they appear in vastly different times, (12000 BC, 1000 AD, & 2300 AD), because from the Dead Sea, these times and regions are all intertwined indistinguishably into the same location. This would mean that the Alabaster, Steel, & Crimson Shades are, in fact the Ghost Children in Chrono Cross seen at a different point in their own contained, aborted timeline.

The CC party seeing them when they're younger, and the CT party when they're the same age as their counterparts. Due to the nature of how time does (or doesn't) flow in the Dead Sea, it's difficult if not impossible to tell if there's actually a conceivable passage of time outside of the Dead Sea itself that would determine the appearance of the age of the three Shades. Due to the way that time and space is knitted together, they could conceivable be any or all ages at once, and just manifesting in a particular form at random, since they're just echoes of Marle, Chrono, & Lucca in a region of a Dimension where they don't properly exist.

Because their echoes exist in the Dead Sea, which is a location where discarded information and time are all merged together, this might also explain why they, have such intimate knowledge of so many different things that have and haven't happened, since they exist in many times at once (and none at all). This would also explain why once defeated by their other selves in Chrono Trigger, they merge together and awaked latent powers in themselves- they're connecting the Another World original with their Home World/Dead Sea counterpart that contains knowledge and other effects from being exposed to the Dead Sea Time anomaly.

It's also worth mentioning that within the Dead Sea where we find the Ghosts of Chrono, Marle, & Lucca, because of the Time Crash it contains the Sea of Eden from 12000 BC, Nadia's Bell from 1000 AD, and Chronopolis from 2400 AD. In Chrono Trigger, the Dimensional Rifts that tear open containing the Shades of Chrono, Marle, & Lucca appear at 12000 BC, 1000 AD, & 2300 AD. I'd hypothesize that the Dimensional Rifts are being torn open into Another World during the event of the Time Crash, since it's the main temporal anomaly, and the Time Devourer is still in its early stages.

I'd be stretching to explain WHY the shades of Chrono, Marle, & Lucca aren't swallowed into the DBT, but it may be because Chrono, Marle, & Lucca travel into the DBT to confront the Dream Devourer. Since their aborted timeline selves aren't able to exist alongside their real selves inside of the DBT (related to the Time Bastard theory), the three of their shades are essentially trapped into a state of partial existance in the Dead Sea, rather than being able to enter the DBT and be consumed.

I was playing today, and I thought it was interesting, what Glenn says upon encountering the Steel Shade. "Even if you are the real Chrono, we will not allow you to harm ours", indicating that at the very least, the Steel Shade bears a very strong resemblance to the genuine article.

Upon rereading this page, I once again reflected on Glenn's words. Perhaps this indicates more than a mere resemblance to Crono, perhaps Glenn truly senses that it is the real Crono whom they are fighting. If we tie this in with the idea that the party controlled in the vortices is not the most "current" version, but rather a version experiencing the alterations of the original; and if we also incorporate the theory that these Shades are in fact some form of CC's Ghost Children; this could all support the idea that said Ghost Children are indeed future versions (or actual ghosts) of Crono, Marle and Lucca. ~

GrayLensman's theory provides purpose to the ghosts, and both benefit from Miguel's quote that the ghosts are echoes from ones far gone. The Shades theory has a powerful thematic link with the Ghost Children, albeit the placement of CT DS's bonus content in the canon is always a bit hard to pull off. 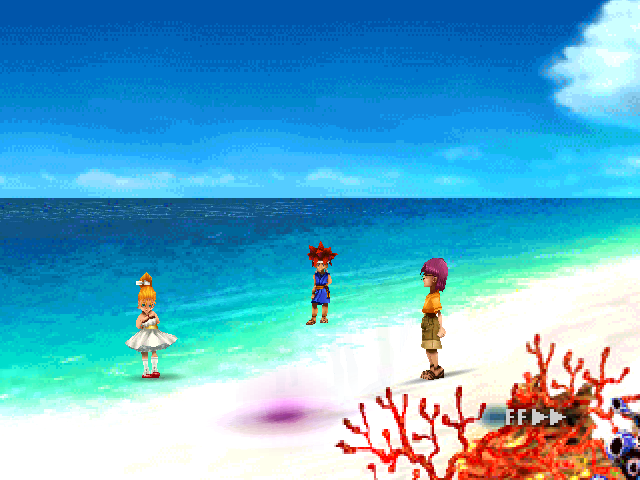