Be sure to read Radical Dreamers Translation Differences or check the notes to each item below.

The Acacian Ring is a memento that once belonged to the Radius figure in the catacombs. Upon viewing it, he snaps back to some semblance of sanity and reveals the secret of the ballroom. To obtain it, one must stop the death trap room with the Einlanzer.

How it is used: Esmeld prepares the tea, his favorite, and administers it to the party; Magil remarks that the stuff - flavored Himalayan Chimpanzee - is one of the best he has ever tasted.

How it is used: Serge drops the rubber centipede down the Mouth of Truth; the toy is described by Kid as a tool to scare people with. It may have other personal uses.

How it is used: Lynx reveals in Radical Dreamers that the Chrono Trigger, if combined with the Frozen Flame, can grant unimaginable powers over time and space, to the point that history can be shaped according to the will of the user of these two powers. Kid carries the Chrono Trigger on her throughout the journey, and if she falls in battle with Lynx, she uses it presumably to reset time to an earlier, safer moment. The fact that she has it with her supports the theory well that Radical Dreamers is a dimension in which Crono was not saved by the C. Trigger.

How it is used: Kid carries a nail file with her that is lost when Serge drops it down the Mouth of Truth.

In the original Japanese, the file wasn't a nail file, but an industrial hand tool:

"As one of the 7 tools, only life is more important than that file!!!"

How it is used: Kid carries a silk line made from a Royal Silkworm with her; it is nearly lost as Serge tries to recover a piece of paper with it by lowering it down the Mouth of Truth.

The Frozen Flame is a shard of Lavos that splintered off in 65000000 B.C. Imbued with special powers, and glowing bright scarlet, it passed through the epochs until arriving in the hands of the people of Zeal. According to Magil: "Once, there lived a people who sought to harness its power, hoping to tap into their yet unknown potential. And so, it became a treasure of great importance and dreams." The Flame eventaully effected the fall of Zeal, and was lost until presumably the Kingdom of Guardia located and stored it. There it was kept, as legend surrounding it grew; it was said to have special powers, including the ability to grant eternal life to its bearer. Whether it could accomplish this was unknown, as it was kept secret until the Fall of Guardia, in which it was stolen and taken to Viper Manor presumably by General Viper. Legend of it intensified, until the aristocrat Lynx heard of it and traveled to the manor to befriend General Viper and get closer to the Flame. He orchestrated a coup, slaughtering the Acacia Dragoons in the process and securing the artifact. About this time or prior, he learned that the Frozen Flame, when used in conjunction with a Time Egg, can allow the user to control history at will. Prior to this, Lucca asked Kid to acquire the Flame and set it on an old friend's grave (most likely Crono's). He sought out Lucca's old Chrono Trigger (which had not been used to save Crono in this dimension, presumably), and ended up killing her though failing to get the egg. He then waited for Kid to return to the manor and seek revenge upon him for Lucca; he confronted them on the night of Le Trésor Interdit, but was thwarted by the Porre army, who subsequently took the flame.

It is possible that the Frozen Flame was used in the Mammon Machine at Zeal; this explains its close proximity to Schala after the Ocean Palace Incident, and also how it caused Zeal to fall. However, no direct evidence exists to confirm this. 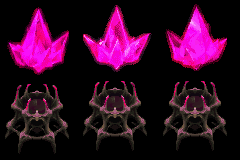 How it is used: The Catacombs of Viper Manor can either be opened with a key that Esmeld gives the party, or in other scenarios, a key found on the corpse of a Goblin.

How it is used: The Goblins of Viper Manor carry healing potions with them that are sometimes left behind after they are defeated for the party's use; a vial also exists in Lynx's quarters.

How it is used: Kid carries gunpowder with her and detonates some in the Mouth of Truth; while it causes some structural damage, it does not completely destroy the Mouth.

How it is used: Kid and Serge find the Hand-Shaped Plate on the remains of a member of the Magical Gobbler Team, and insert it into the Mouth of Truth to drain the atrium of water and Piranhas.

In the original Japanese, the hand-shaped plate is revealed to have contained the ultimate truth of the universe, which the Mouth of Truth refuses to speak.

...This is it, the ultimate truth of the universe...

"Seeing the truth of the world, even the Mouth of Truth will coil its tongue up."

Even when making a joke like this, Magil still uses his usual serious tone.

"The truth of the world? Those pictograph characters? Damn it! We could sell it for a high price!"

How it is used: Kid carries with her a scroll used as an Imperial Code Chart Primer, the empire being Porre, most likely. It is spared being lost down the Mouth of Truth.

How it is used: Kid carries lipstick with her, used by Serge to decorate the Mouth of Truth in a vain attempt to get a reaction from it.

The lipstick had a different use in the original Japanese:

Seeing the red lips of the beard-oldman, Kid explodes in anger.

"What's wrong, Kid, isn't that how cosmetics are used for?"

"This lipstick is used for drawing marks just in case we lose our way."

The Bunny is a powerful incendiary device given to Martian Universal Detectives (such as Mick Van Jovi). Kid came into possession of one through a game, and eventually used the bunny to explode Lynx's spaceship.

How it is used: The music box plays the piece that was composed by Serge in his early days as a musician. Kid cried when she heard the music; it was Lucca's favorite.

How it is used: Kid carries a mirror for grooming and upkeep with her; it is placed within the Mouth of Truth, but causes no reaction. Kid afterwards fixes her hair with it.

How it is used: Kid carries special, tasty raisins with her as emergency rations; they are eaten by the Mouth of Truth.

How it is used: The vault key unlocks the vault in Viper Manor, which contains a fake Frozen Flame in various scenarios, as well as heaps of gold. It is found within the Purple Book, Back in the study.

How it is used: The White Jewel, when attached to a special dagger, can extract the soul from a person's body, and subsequently emplace it in another host body. It turns milky white when filled with a soul; it is possibly used to carry Kid's soul after she is removed from the Mandora Monster.

How it is used: The Book of the Dead is an ancient tome that summons forth Lilith, an assassin, to murder whoever's name is written within it. Kid accidentally kills Lynx when she writes a note of jest in the book. It's also called the Soul Contract.

Excerpt: Silence of the Lambs
Used by: Kid, Serge

Excerpt: Hitchhiker's Guide to the Galaxy
Used by: Kid, Serge

Exceprt: This is a hint about the Radical Dreamers sound test.
Used by: Kid, Serge

Excerpt: The Art of War
Used by: Kid, Serge

The Purple Book, Back yields the Vault Key.

Blue Book, Front
It's about a young man says farewell to a baby elephant. No idea if it was taken from an ever published book.

Red Book, Front
Sort of an adult reading. That's why Serge got slapped (HP-10). Again, I don't know if it was from a real book.

Note: If you choose this book, Serge will lost 10HP, not love points. But this event won't kill Serge, nor produce any sound effects (odd).

Purple Book, Front
About Neo-Epoch(Neo-Silverbird) just like what Demiforce translated, although, the lines below were an invention:

Green Book, Front
About a goblin who guards a house for its master but falls asleep.

Blue Book, Back
Same as Demiforce's translation. There's no sound test in original game though.
Note: Serge will lose 18 HP and get killed if his health is low enough.

Red Book, Back
Jakobson's thesis about Hume's theory; sounds like research about space and time. (Not the Jakobson and Hume in real world, though.)

Purple Book, Back
The key, of course. Although the scene is not as detailed as Demiforce's translation.

Green Book, Back
A disgusting love story. Still, its origin is unknown.

White Book, Back
A detective story on a small island in the storming sea.