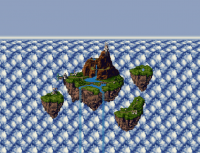 The Kingdom of Zeal


The Kingdom of Zeal is a magical civilization that existed in antiquity. When mankind found the Frozen Flame, it gave humans the genetic power of magic. Together with the power of the Sun Stone (another artifact containing elemental energy) several people founded a kingdom of Enlightened Ones who could use magic; eventually, after much work and sacrifice, they raised the continents on which the Kingdom sat to float in the sky. They established cities of white and gold; the citizens, flush with basic necessities and opportunities, perfected art and science while seeking enlightenment. Human achievement reached its zenith; in the cities of Kajar and Enhasa, they engineered great works with the power of magic, and researched dreams as an imaginative frontier of understanding. The Enlightened One] were led by a king and queen, whose powers of magic were innate, rather than borrowed from the Sun Stone. Three gifted individuals known as Gurus also presided over the Kingdom.

With the combined effort of its citizenry and the erudite, wise leadership of its rulers, Zeal was poised to elevate humanity higher than it had ever dreamed, uplifting men and women upon a lofty empire in the heavens. Unfortunately, several tumultuous events would spell the kingdom's downfall. Under the Gurus Belthasar, Melchior, and Gaspar, the Enlightened Ones discovered the being Lavos slumbering within the planet. They found that the creature had apparently endless reservoirs of power, and drew up plans to extract energy from his emanations. After the untimely death of King Zeal, the Enlightened Ones constructed the Mammon Machine and began drawing energy from the beast below. They disowned the elemental power sources of the planet in favor of the new energy, which was said to corrupt Queen Zeal "almost overnight." Whle the Gurus and Princess Schala began to worry over the machine's implications, they still drew up plans to construct an Ocean Palace on the seafloor to further harness the power of Lavos. Success in this endeavor meant that enough magical power would be supplied for the achievement of immortality; the citizenry avidly looked forward to the project's completion. Dalton, chief of security, began using Earthbound slaves to hurry the construction of the complex.

The day of christening arrived, and the Mammon Machine was transported to its final resting place at the bottom of the sea. Upon activation, Lavos awakened and caused a temporal distortion that scattered the Gurus and Prince Janus throughout time. Queen Zeal and Schala remained, but the palace soon collapsed. Lavos then rained fire upon Zeal, shattering the islands which plummeted to the ocean in ruin. While a few survivors mingled with the Earthbound in Last Village, the culture and knowledge of Zeal had been lost to the flames of Lavos and buried beneath the sea. Legends and rumors of its might and magic were passed down in generations, though they were mostly dismissed as nothing more than idle fantasies. The legacy of the Gurus and Janus spirited away in the Ocean Palace Incident would continue exerting powerful influence upon the world, however. The Gurus each pitched in to assist Crono in saving the world from Lavos, while Janus became the fearsome mage known as Magus, and tried to stop the creature alone. Zeal is remembered for its tragedy, but perhaps the most appealing aspect of the civilization is its beauty -- its emerald pastures and jeweled edifices, and the zealous appetites of its inhabitants, who lived boldly and sought the fulfillment of bright dreams.