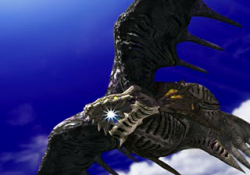 The Dragon God is the culmination of Dragonian science, a machine built to control nature itself by manipulating derivate forces of the physical world. It was engineered to crown the city of Dinopolis, and was activated before 2400 A.D.; given sentience, it was able to think and speak on its own. In 2400 A.D., Dinopolis and the Dragon God were both pulled into the Keystone Dimension in 12000 B.C. by The Entity to counteract the introduction of Chronopolis into the era; a war ensued between the Dragonians and the forces of the time fortress. In the ensuing battle, the actual Dragon God was defeated and somehow consumed by the Time Devourer; a physical avatar remained. When Chronopolis prevailed, it seized control and subjugated the Dragon God, eventually dividing it up into six entities to better exert control by. As the Dragon God was able to control nature as a whole, these Dragons each represented a facet of nature, and were assigned colors; these forces were called Elements, and devices able to exert force stemming from a certain color were able to be constructed at certain power spots around El Nido. The six Dragons were each given an island and their own intelligence; these included Water Dragon Isle, Earth Dragon Isle, Gaea's Navel (which existed prior to terraforming), Marbule, Mount Pyre, and Sky Dragon Isle. Though under the control of FATE, the Dragons still conversed with one another, waiting for a chance to strike back at the supercomputer. They maintained hatred towards humanity, perceiving it as corrupted by Lavos's evolutionary influence.

The Dragons were also equipped with six special relics that were destined by Belthasar to allow Serge access to the Sea of Eden. They were also apparently given the power to cross dimensions at will. For thousands of years, the Dragons slept dormant, and were not directly in contact with other beings. In 1006 A.D., however, Serge made contact with the Frozen Flame in Chronopolis after being taken there by Wazuki to heal a panther bite; the magnetic storm that allowed him passage also shut down Chronopolis's systems and defenses. The Dragons temporarily united to create a seventh Dragon, Harle, who was given the imperative to steal the Frozen Flame for the Dragon God's use. The Dragons then slept once more. When the dimensions split in 1010 A.D., defense mechanisms probably created by Belthasar kicked in to kill off duplicates of the Dragons in different dimensions. As a result, the Water, Green, and Earth Dragons survived in Home World, while the Fire, Black, and Sky Dragons inhabitated their areas in Another World. The Water Dragon was paid a visit in 1020 A.D. for his Ice Breath, which enabled Serge to cross Mount Pyre. At the Dead Sea, the Sky Dragon rescued Serge after crossing over from Another World.

Later, Serge visited all the Dragons to obtain their relics; they allowed him to have them, hoping that if he defeated FATE, they would be able to unite once more and take the Frozen Flame. This occurred precisely as planned (though Belthasar laid the framework), and the Dragons united across the dimensions over Chronopolis, forming the Dragon God once more. Harle stole the Frozen Flame, and the Dragon God took it back to Terra Tower, the emerged Dinopolis ruin. While possibly making plans to achieve vengeance on humans, the Dragon God was assaulted by Serge and his party, who surmounted Terra Tower and battled the machine. The Dragon God used its Elemental power to simulate various environments, but was still overcome; it then retreated back to the belly of the Time Devourer, leaving the Frozen Flame to be taken. This marked the end of the Dragon God's existence; the destruction of the Time Devourer thereafter spelled its own eradication from the world. Presumably, the ability to fashion Elements remained in El Nido. The legacy of the Dragonians would live on in the Keystone Dimension. 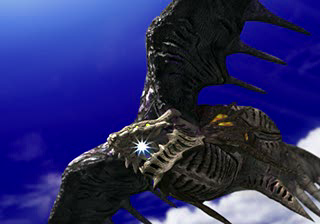