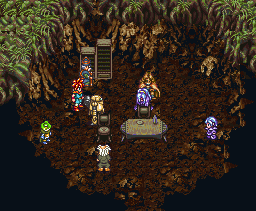 Algetty is the formal name for the city of the Earthbound people, consisting of several dugouts and caves within the system known as Terra Cave. It was presumably established after the Ice Age began, as the inner spaces of the planet would be safe from the raging winter weather outside. Quality of life is seemingly low; the caves are the only refuge and have walls made of rock and dirt, and Janus famously called the establishment a filthy hovel. Whether Algetty was a tidier and more enlightened place before the Enlightened Ones split off from their brothers is unknown. The Earthbound did venture out of the caves at times, like the bystanders who watched the tsunami erupt from Mt. Woe's descent into the ocean. Algetty was led by an elder apparently selected by merit, age, and wisdom. A docile old man was elder during the events of 12000 B.C.; he welcomed visits from Schala and remained humble to all visitors. The Earthbound constantly feared the Beast's Nest, an adjacent area leading to Mt. Woe which housed fearsome beasts. Dalton or other foremans of the Ocean Palace project selected slave labor from the Earthbound, and these people were never seen again.

The Earthbound abandoned Algetty after the Fall of Zeal. Together with survivors of the fall, they established Last Village topside, where the elder continued to wisely watch over his people. Dalton briefly claimed his own right to rule over the survivors. Crono's friends foiled his plot for a new kingdom atop the Blackbird. Algetty's legacy remains one of survival through arguably the darkest chapter of humanity in the series.

"Algetty" seems to be based on the latin verb algere meaning "to be cold or to be neglected."