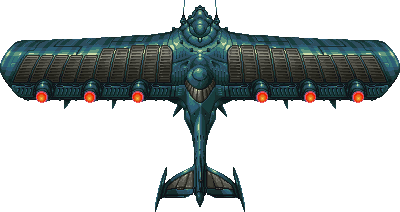 Parameters: The party is imprisoned on the Blackbird during an event. They can exercize no control over it.

First Seen: Docked in Zeal after first arriving in 12000 B.C.
First Used: After being captured by Dalton after the fall of Zeal.

The Blackbird is an airplane and, aside from the Ocean Palace, the ultimate creation of the Guru of Reason Belthasar. It is a pinnacle achievement of Zeal that symbolized its advanced culture and technology, and was named such because it resembled a bird in flight. Propelled by jet engines, the Blackbird featured several interior corridors for storage or personnel use, at least one hangar for docking smaller airborne craft, a complex ventilation system, and armaments in the form of turrets emplaced on conveyers on both wings. In the Lavos Timeline, the Blackbird was probably destroyed in the Fall of Zeal, while in the Keystone Timelines it was commandeered by Dalton and flown to the safety of the sky. Dalton used it as an aerial headquarters after claiming authority over Last Village, and imprisoned the captured party inside. The Dalton Corps outfitted the Epoch with wings within one of its hangars. Crono's friends later destroyed it by misfiring the Epoch's laser weapons, which sheared off its port wing and caused it to crash into the sea.

Per the Mystery Interviews, the Blackbird was greatly expanded in scope after the decision to increase CT's ROM size from 24 megabits to 32.

Reld: I think the name of the Blackbird is a pun. There are a few sections in these scans (Feb. 95 V-Jump; see Chrono Trigger Prerelease Coverage) that are labeled "KuroTori Check" (クロトリチェック). "KuroTori" is just short for Chrono Trigger (Kuro[no] Tori[gaa]). These sort of shortened portmanteau titles are pretty common in Japanese media, but I didn't get it at first so I spent an embarrassing amount of time trying to figure out what "kurotori" meant. While I was trying to figure it out it occurred to me that "kuro" in Japanese means black, and "tori" means bird. So I went and looked up the Japanese name for the Blackbird. It's 黒鳥号 or "kurotorigou". I guess the "gou" on the end makes it "the Black Swan" rather than just the black bird? Regardless, I doubt it's a coincidence that the game "KuroTori" features a vehicle called "kurotorigou". I think it's a sort of meta pun on the game's title.

From: Locations (Chrono Trigger)
From: Vehicles