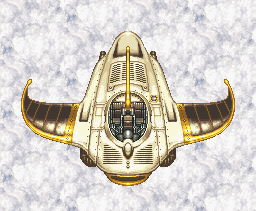 The Epoch of Chrono Trigger is a time machine; its formal name is the "Wings of Time", and it was created by Belthasar, the Guru of Reason. While unconfirmed, he most likely began researching the project while still serving in Zeal; in 2300 A.D., the machine saw realization. He intended to use it to return to Zeal from the future, but felt death approaching before he could succeed. His last completed work before insanity claimed him in that era, Belthasar left it to the party after they were sealed from 12000 B.C.; the Epoch restored access to the era and allowed free movement throughout time. During the events of the Fall of Zeal, it was mysteriously preserved and came to rest outside Last Village. When Dalton assumed control of the world with the Blackbird, he took the Epoch and had it outfitted with wings and engines that made it capable of flight, as well as laser weapons. Dalton intended it to be his air-throne, naming it the "Aero-Dalton Imperial," but the party defeated him on its maiden voyage. The party then accidentally shot the Blackbird down through a misfire of the Epoch's weapons. Once they regained control, they used the vehicle to prepare to defeat Lavos. Though it is not what happened according to canon, the Epoch can be used to smash through Lavos's shell and avoid the first battles with it entirely. This unfortunately denies the party a Gate to the outside world once they are inside.

The Epoch can be named when first given to the party, leading some to speculate that it is related to the scrapped idea for more characters. For more information, consult Characters (CTP).

The Epoch was originally planned to have three modes of travel, the third being a hovercraft that could fly only on land. Pictures and a description are available at Epoch (CTP). In the earlier versions of the game dated late 1994, it produced exhaust vapor and its back grill could be raised and closed.

Sylbird probably stands for Silver Bird. Coincidentally this was the English name for the Sylbervogel, a ramjet rocket designed by Eugen Sänger before the end of WWII for the Germans. The purpose was to create a rocket to strike at America from Germany. Curiously, the Silver Bird used its fuselage to produce lift; the Epoch's design is vaguely similar to body-lift designs as well. More curious still is that Eugen Sänger was a leading expert in aircraft design, as was Belthasar. And finally, the Epoch does fulfill a long range missile function in CT; it was launched in 2300 and hit Lavos's shell in 1999 (a very long distance to fly), destroying it as a powerful missile might. Given that the connections are vague and circumstantial, it seems quite unlikely that the CT team named the Epoch after the Silver Bird, but the similarities are worth mentioning.