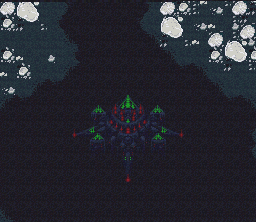 The Ocean Palace is an undersea complex designed to house the Mammon Machine. It is the culminating engineering achievement of the kingdom of Zeal and the staging ground for an event that influenced all eras of time. Conceived after Lavos had been discovered as a power source to the people of Zeal, it was masterminded by the Guru of Reason, Belthasar, who envisioned constructing a palace on the ocean floor to get closer to Lavos. Belthasar and his fellow Gurus soon expressed doubts about this plan, and feared a possible reaction from the sleeping giant. Regardless, assembly continued as Queen Zeal made Dalton foreman of the project (at least in the Keystone Timelines; in the Lavos Timeline, Belthasar presumably finished). Dalton recruited Earthbound slaves for the physical handiwork; meanwhile, the people of Zeal felt growing anticipation for the realization of immortality through Lavos's energy. They viewed the Ocean Palace as the ultimate achievement of the magical kingdom. After preparations were complete, the Mammon Machine at Zeal Palace was transferred to the undersea complex and sealed with the power of the Pendant. Masa, Mune, and Doreen feared the activation of the machine, as did the Gurus.

The entire royal family assembled for the event, as did the Gurus and many citizens from Zeal. The Nu staffing the palace became fretful as the power of the Mammon Machine increased to its limit; Queen Zeal scoffed at the worries of the Gurus, while Dalton eagerly awaited immortality. The draining force of the machine awakened Lavos, and a temporal distortion erupted in the heart of the palace. Lavos appeared, and before the Gurus or others could react, they fell into temporal distortions leading to different eras. Schala alone remained with her mother, as her brother Janus too had traveled through time. It is unknown what happened after these events in the Lavos Timeline; Schala possibly had the power to transport herself and her mother out of the palace. Regardless, Lavos exacted total destruction on the Kingdom of Zeal, which fell to the planet in pieces. A few citizens survived and mingled with the Earthbound; the Ocean Palace had been destroyed.

When the Ocean Palace Incident occurred in the new timeline Crono created, Schala was left behind and engulfed in a dimensional distortion that took her to the Darkness Beyond Time. The Mammon Machine was also temporarily shifted with her, though apparently returned to the normal world.

After Schala was left alone in the palace, she grew indescribably sorrowful, causing the Frozen Flame (presumably interred in the Mammon Machine nearby) to reincarnate her as a child far in the future and give her a second chance.

ビマーナ is a style of (Asian) Indian architecture used in many Hindu temples. In English, it's written 'Vimanam', and the term 'Sikhara' refers to the same thing.