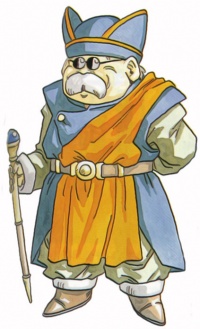 
Melchior is the Guru of Life, who served in Zeal with his peers Belthasar and Gaspar. During his stint, he mastered the use of elemental power and became a renowned smith of weapons and armor. His most powerful elemental creations during his tenure were the Swallow and Safe Helm, interred in the North Palace at the time of the Mammon Machine's activation. His most important and strongest creation was the Masamune (originally the Ruby Knife), forged with Dreamstone and two "dreams" of his making. He inscribed his name upon the blade. He helped create the Mammon Machine and also created the Pendant for Schala. Along with his friends, however, he he soon objected to the plans regarding the Ocean Palace, and in the Ocean Palace Incident, was displaced to 1000 A.D. near Medina. Southwest of that city, he constructed a simple house with a basement intended for forging weaponry. He made his living from this trade, and attended the Millennial Fair in order to sell some of his weapons. He regretted having to take this profession, as the tools he was creating could only be used for bloodshed.

When the Crono found the Bent Sword and Bent Hilt, Melchior instructed him to retrieve a piece of Dreamstone so that he could repair the sword. He was dumbfounded that the young man had obtained its pieces. His surprise was heightened when Crono successfully retrieved the item, and, with Lucca's help, he processed the Dreamstone and forged the sword anew with magic requiring intense concentration. He gave a word of warning to the party, then continued to live peacefully until King Guardia XXXIII was placed on trial for allegedly attempting to sell the Rainbow Shell. After Yakra XIII was defeated, Melchior arrived on the scene and offered his assistance in creating immensely powerful weapons and armor for the use of the party, including three Prism Helms and a PrismDress. He created Crono's ultimate weapon, the Rainbow, by utilizing the Sun Stone. At the Moonlight Parade, he voiced his approval of the decline of demand in the arms business.

Very briefly, another version of Melchior lived in the Keystone Timelines. Exiled due to the Prophet's influence, he was jailed atop Mt. Woe in a block of ice, a prison protected by Giga Gaia. After his rescue by the party, he became confused and asked if he knew the party from somewhere. He then shortly stayed in Algetty, where he gave the party the Ruby Knife -- the initial form of the Masamune, which was probably allowed to be finished in the Lavos Timeline since the original Melchior was not jailed then. His remaining time was short, however, for at the moment of the original Melchior's departure, he was engulfed with Janus, who he had taken care of, in a black Gate. This is the basis of the Time Bastard mechanism.

Melchior is said to not only have made the Masamune in the Radical Dreamers Dimension, but to have created the Einlanzer as well as a sort of sister sword.

Belthasar, Melchior, and Gaspar are three wise men who brought gifts of gold, frankincense and myrrh to the infant Jesus according to legend.

The following is from the afterword of the book "Lamb" by the author Christopher Moore. The novel itself is a work of fiction, but it is based on some truth. Moore did extensive research of both the Gospel and the Bible as a whole before writing. Here's what he says:

"Another Gospel misassumption is that the three wise men were kings, or, in fact, that there were even three of them. We make that assumption because there are three gifts given to the Christ child. Their names are never mentioned. The names Balthasar, Gaspar, and Melchior come to us from Christian tradition written hundreds of years after the time of Christ." (pages 442-3)

When the Catholic church committed those wise men to sainthood, they did so with the names Melchior, Gaspar, and Balthasar. There's no actual record in the primary sources, but all three names were canonized together at a much later date.

A couple of centuries after the Gospels were written (say, 7th or 8th century), though, the names Gaspar, Melchior, and Balthazar were traditionally used to describe the three wise men. Perhaps people were trying to "boost" Jesus' image by showing that royalty from the three major world powers were visiting him -- Balthazar would obviously have been a Babylonian name at the time, while Gaspar/Caspar would have been Persian and Melchior would have been Arabian.

As for Melchior's Japanese name, Bosch is Dutch for "forest". He could also be named for Hieronymus Bosch, a fifteenth century Netherlandish painter.