A pendant that glows with a strange light.

The pendant was created from Dreamstone by Melchior and passed down generations from the corridors of Zeal to the halls of Guardia. It has a colorful history that spans timelines. In the Lavos Timeline, it came into existence by the hands of the Gurus of Zeal, who forged it and the Masamune out of the royal family's supply of the red rock. After the Fall of Zeal, it was somehow recovered from the Ocean Palace Incident and preserved in the Last Village. This interestingly serves as evidence that Schala originally teleported herself and her mother out of the maelstrom beneath the sea and was able to pass on the heirloom. It then fell into the hands of Guardia, and was passed down as a family heirloom. Finally reaching Marle, it was the instrument of the Entity that set the events of Chrono Trigger in motion. Utilizing a reaction with Lucca's telepod, the Entity seemingly caused Marle to go back to 600 A.D., followed by a brave Crono who recovered the pendant after its fall and launched a pursuit. Carried with the party subsequently throughout the Keystone Timelines, its original purpose was rediscovered when the party discovered that charging it with energy from the Mammon Machine allowed it to interface with magical seals and doors from Zeal's time. Integral to the plot, it allowed the party to advance to the throne room of Zeal, and continue the quest to defeat Lavos.

The pendant in Chrono Cross appears in Kid's possession, though it is not to be confused with the Astral Amulet or an incomplete Time Egg built by Lucca (both also in Kid's inventory). In Keystone T-2, and according to Belthasar's plan for Project Kid, Schala, who in this timeline retained the pendant from the Ocean Palace Incident, gave it to her daughter-clone Kid before sending her to the modern age to be found by Lucca. It is Kid's pendant that rewinds time a little after she is captured by Lynx; Lucca comments on this at the end of the game, and reveals it was for her protection. It is possible that Doreen corresponds as a "dream of Melchior" to the pendant as Masa and Mune do to the Masamune, since Doreen appears by Kid's side (and she's holding the pendant). This possibly means that Doreen "dropped" the pendant when Marle was first gated to 600 A.D. so that Crono could pick it up and use the Telepod reaction to go back as well, though this is all speculation.

At first glance, the pendant's history in Chrono Cross invokes an interesting paradox. If Schala doesn't leave the Ocean Palace in Keystone T-2, how can she ever have the pendant passed down to Marle? How could the events of Chrono Trigger ever happen in this situation? The principles of Time Traveler's Immunity and Time Bastard remedies this situation; it's no matter if Marle and Crono existed in a pendantless world when they first met at the Millennial Fair -- these versions would be erased from existence as soon as their past counterparts originally departed for 600 A.D. in the Lavos Timeline. And of course, the other Crono who would emerge in that era would be proudly wearing the pendant. Please consult the Time Bastard entry for a better understanding. 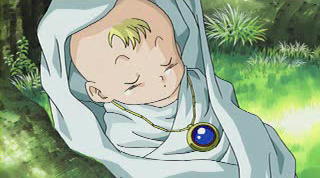