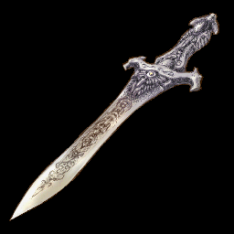 The legendary sword Garai once wielded. It is the only sword able to beat the Masamune's evil power.

The Einlanzer is a holy sword forged by the Dragonians. Its origins are unclear; presumably, after the Dragonians became extinct, the Acacia Dragoons acquired the sword and their strongest warriors wielded it. At the time of the mightiest fighter's death or retirement, the sword would be passed down to his son or the next in line. The sword was held to have sacred power. It was held by the 13th Grandmaster and bearer Garai until around 1005 A.D., when Radius killed him due to the evil Masamune's influence. The sword was then unused until 1016 A.D., when Dario officially succeeded his father and acquired the right to use the sword in battle. He would only have it for a year before succuming at the Isle of the Damned. The Einlanzer was left there in Home World, but taken back to Termina in Another World, where it was placed near Dario and Garai's formal grave at the cemetery, where it was regularly visited by Glenn and Riddel. After Serge set out on his quest and eventually decided to go to the Dead Sea, he found that the Masamune's evil aura was blocking the way; Radius noted that the only way to dispel its power was with the holy Einlanzer. Serge attempted to retrieve it from the Isle of the Damned, but had to fight Garai for it; he yielded in defeat. It successfully dispelled the evil power of the Masamune thereafter, and was wielded by Glenn for the remainder of Serge's jourey. The Einlanzer in Another World was soon obtained by Glenn as well, who learned how to put both swords to lethal use in combat.

Why the Einlanzer is special or sacred is unknown; it may perhaps be imbued with Elemental power given by the Dragonians during the time of its forging.


How it is used: In various scenarios, the Einlanzer can be used to stop the descent of a spiked ceiling by thrusting it into the floor. It can be located in the Clocktower Storage Room. The Einlanzer was forged with the Masamune presumably by Melchior; it grants its wielders special protection through magical enhancement.

"Ein" is German for "a," and "lanze" is German for "lance". A Lancer. Since German is the root of early English, and that's where we get a lot of stories of knights and holy swords (King Arthur, Beowulf, Sir Gawain, etc.) 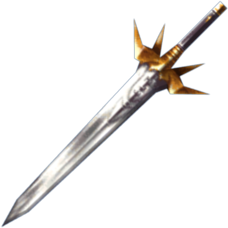