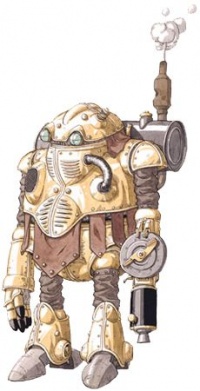 Robo is a humanoid robot built before 1999 A.D. presumably in the Geno Dome or Factory to serve and study humans. His manufacturer was the supercomputer known as Mother Brain. Robo had a female robot companion named Atropos XR; she was probably made at the same time as Robo. Robo was stationed in the Proto Dome before the Apocalypse; Lavos's eruption disabled him, and he remained sedentary until 2300 A.D. when Lucca reactivated him. Throughout the course of the game, Robo struggled with his purpose in life; soon after his reactivation, he was labeled useless and trashed by similar models known as the R Series. During the Origin of Machines Sidequest, Atropos XR and Mother Brain told him that his purpose was to study humans in anticipation of genocide against them; fortunately, this was not his intended purpose, and these suggestions were simply the product of Mother Brain's corruption and Atropos XR's unhealthy reprogramming by the supercomputer. Robo also first suggested that the events of Chrono Trigger were part of a plan given by a mysterious Entity that guided the time travelers; this came as a result of 400 years of contemplation done during the Fiona's Forest Sidequest, in which Robo was left to relentlessly till and cultivate Fiona's Forest -- culminating in the erection of a Forest Shrine and his internment there.

At the end of Chrono Trigger, Robo returned to 2300 A.D. to find a better future in the form of the Keystone Timelines. Atropos XR lived once more in the bright future, and the two can be seen in the ending of the game sitting upon a cliff. Though Robo is said not to have emotions, this is a fabrication in the English version of the game not found in the original Japanese.

Masato Kato has confirmed in this interview that Robo is the Prometheus Circuit in Chronopolis, which denied FATE access to the Frozen Flame upon Serge's touching it. In the future, he had volunteered to be an integral component of Project Kid. FATE eliminated him after discovery of the circuit, though since Chronopolis is no longer necessitated by the Time Devourer once it is destroyed by Serge, Robo presumably lives a free life in the future of the Ideal Timeline.