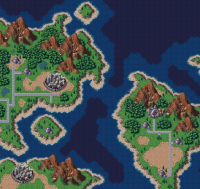 1999 A.D. marks the apocalypse of Chrono Trigger. Lavos erupts in this era and rains destruction upon the entire world. His spires cleanse the planet in fire, wiping the crust of animal and plant life and effectively dismantling human civilization. All that remains after is a bleak atmosphere and city ruins, housing a minimal number of humans who depend on the Enertron to survive.

The overworld itself is not accessible by the party. Fans can explore with a savestate in Downloads, but the era is not finished; only one quadrant is complete, and there are no working exits. The map's design is not compatible with the shape of the continents in 2300 A.D., making it difficult to guess where Truce and Porre might lie on that map. The world in 1999 can sort of be seen if Lavos succeeds and tbe bad ending plays. The resulting cut scene eventually shows the planet as it would be seen from space (though it doesn't show the world up close), and the landmasses look like they do in 1000 A.D. This is still inconsistent with the landmasses in 2300 A.D. Even if Lavos's eruption caused giant continental drifts, there would still have been no reason or means for humans to erect roads across the new landscape.

From: Locations (Chrono Trigger)
From: Chronology