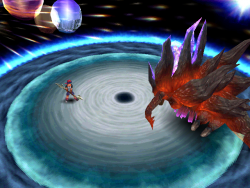 The Darkness Beyond Time is the final wastebasket for timelines nullified by time travel. It can be accessed physically as a place, and served as the home of the Time Devourer. Apparently, when Lavos was defeated, he was relegated to the darkness; there, he took advantage of Schala, who had been transported there by the Ocean Palace Incident. He bound with her to evolve into the Time Devourer, a being that once matured would be capable of consuming space-time. The Dragon God also was sent there somehow after its defeat at the hands of Chronopolis. The Darkness Beyond Time's mechanics are largely theorized, however; it is stated that when timelines are nullified, they end up in the Darkness Beyond Time. In the final battle, tiny, transparent globes of what appeared to be locations passed through Serge and the Time Devourer; these can perhaps be inferred as discarded timelines. In any event, special conditions are needed to access the area. A catastrophic dimensional distortion threw Schala there, while Serge employed a Time Egg and special portal arranged by Belthasar to achieve passage.


In the ending "Dream's Epilogue", the party encounters the Dimensional Vortex in 12,000 B.C., 1000 A.D., and 2300 A.D., and completes them by defeating their shades. At the End of Time, Gaspar reveals that his bucket to the Day of Lavos has been overwhelmed with power from the Darkness Beyond Time, representing a new threat. The party enter the bucket and find a version of Magus from a time position after Lavos's defeat; Magus relates that a new enemy has emerged in the Darkness Beyond Time—the Dream Devourer, capable of feeding on thoughts, dreams, and memories across time.

The party follow him through a Gate to the Devourer and find Lavos merged with Schala, who floats in a bubble above the eye of Lavos. Magus tries to defeat the Dream Devourer and free Schala to no avail. Schala reveals that she wants all existence to be destroyed and battles the party, who barely defeats the creature. The Dream Devourer is mostly unaffected, and Schala incapacitates the party. Magus returns, but Schala awakens and tells him that no power can save her, and that he should live his life to the fullest before the Dream Devourer eventually consumes everything. She sends Magus away, then returns to her sleep, and the Dream Devourer presumably continues its evolution to become the Time Devourer.

Please note that in the English translation of the game, the DBT is erroneously translated as "Beyond Time's Eclipse". The original Japanese verifies that this is the Darknses Beyond Time.

Translation: Beyond the Darkness of Time