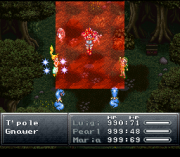 The magic section is divided up into sections dealing with the theoretical roots of magic, the spells and techs themselves, and information regarding the combat systems of each game.

"The universe is composed of four basic elements", spoke Spekkio. These elemental forces, including Lightning, Fire, Water, and Shadow, can be biologically manipulated by living entities provided they have the right genetic makeup. Humans originally evolved without this trait for controlling the forces of nature, but in 3000000 B.C., when contact was made with the Frozen Flame, humans were imbued with the power to harness the energies and forces of their world according to their own will and skill at the craft. This ability, given to humans by Lavos through the Flame in order to diversify the world for later harvest, came to be known as magic. For many centuries humans were able to use (and misuse) this fantastic ability and even built an empire based solely of, by, and for individuals with the ability to use Magic. The Kingdom of Zeal, as this empire was better known, fanatically pursued the knowledge and application of magic, even unto the dream of immortality and eternal life. Created with the aid of sorcerors and the artifact known as the Sun Stone, Zeal was truly a magical kingdom, as its power sources allowed even those with reduced inborn talent to use magic and bend reality. Their radical dreams ended in ruin, however, as they tapped Lavos too strongly and, perhaps posing a threat with their increased abilities, were destroyed and erased from history.

It was after this catastrophe that the surviving humans tried to amend for the sins of the people of Zeal by working together side by side to survive the last vestiges of the Ice Age while losing any knowledge of the use of magic until it became a myth -- or worse, in the Middle Ages, a synonym of the Mystics. As the dominant gene for magic slowly receded within human populations, the various beasts and peoples of the Mystics maintained their own mastery in magic. However, the trait is still there, waiting to be awakened in the humans; this is the act of Spekkio when he gives the party magic, and the reason Ayla cannot receive it. She simply was born before the human race as a whole acquired the genetic ability. The type of magic a person identifies with can be genetic or temperamental. Spekkio also notes that magic ability is based on the strength of the heart, and is possible this way as long as the genetics are in place, too; this evokes the "Chrono Trigger" theme of strong-willed living and dreaming. With this history in mind, there are four types of humans:

Magic still exists in the world, but in modern times it has never reached the proliferation it had in the past. The Elements of El Nido are only mimicries; the true remaining users of elemental power are the heroes of Chrono Trigger, and the Gurus of Zeal, as Belthasar noted himself when he informed Serge's party that his use of magic granted him much advancement in the research of time when he founded Chronopolis.