Magic in Radical Dreamers is the real thing; that is, it does not rely on Dragonian Elements or relics to work its effects, but is comprised of the intrinsic manipulation of the four basic elements. While none of the old Chrono Trigger Single Techs or otherwise are used, Magil introduces a new repertoire of deadly spells (as to be expected from his real identity), while Kid and Serge demonstrate a mostly elementary grasp of the subject, able to cast low level spells provided they mutter an incantation. In Kid and the Sunflower, Kid awakens her innate ability to cast magic in a fit of rage. Not to be missed, the monsters of Viper Manor can also employ the fundamental forces of the universe for ill ends, which is unsurprising due to their probable Mystic heritage. The occupants of the manor also make flashy displays time to time as well, rounding out the unique and interesting magic presented in the game. Please note that some of these names are not featured in the game, as most of the spells went unnamed. My namings are marked with an asterisk.

Named after the famous Black Wind that foretells impending doom, this spell is used by Magil and emanates from his fingertips. It unleashes a flurry of tiny razors that home in on the target and cut it to shreds.

Demon Warlocks can seemingly summon frogs and leeches. The amphibians are highly poisonous, and both creatures are summoned in huge capacities. They disappear if the summoner's concentration is interrupted, however, suggesting that this is illusory magic.

Vera, the Porre spy, uses a cure spell to heal the party after having holding audience with them.

Destruction aura is a burst of psychic energy used by Magil to combat Poltergeists. Serge notes that close contact to it nearly seared his skin.

In the original Japanese, it was a Double Tech by Magil and Kid.

"Hold on, Serge! You've done quite well!" When I'm about to give up to the unbearable cold, I hear Kid's voice. I...am...still...holding...out...I...am...still...standing.... I see Kid is running at me. The dagger in her hand is shining in blue! While I am attracting the ghost's attention, Magil has finished his demon dispelling spell. I see Kid (yes, it is Kid, not Magil) throws a torrent of blue light (blue torrent, I just assume it should be a light stream) toward between the ghost skull's eyes... "Is it...all...over...?" I feel extremely relax, and my consciousness begins to fade out... </pre>

Illusory magic enables a practicioner to envelop persons in an illusory world that nonetheless seems and feels real. It is used by the sorceror Gange to pit Kid and Serge in battle at a coliseum.

Inferno is the name of Magil's primary fire spell, which he uses to torch the ferocious cats guarding the perimeter of Viper Manor.

In Kid and the Sunflower, Magil employs a flash of light to cut one of the Mandora Monster's tendrils to free Serge.

Magil can levitate at will, and can also cast the spell on others to give them levitation.

In addition to his ability to fade into the shadows, Magil can also cause a flood of light to illuminate an area.

Lunachant Ringforce Kick is used by Magil to thwart the Mandora monster and return Kid to her normal form. It uses an incantation:

Mandora Bind is used by the Mandora Monster to fuse with a victim.

Used by: Lynx, possibly others

Not much information is revealed about the perimeter counterspell, other than that it surrounds and protects Viper Manor from trespassers. It may simply be an alarm system, or may actually employ malovalent magic to inflict harm upon any invading parties. Regardless, it is averted by advance information picked up by Kid.

Phantom Break is the most powerful spell used by the Mandora Monster; it melts anything in its path and even dissolves Viper Manor in Kid and the Sunflower. An incantation is needed to release it: 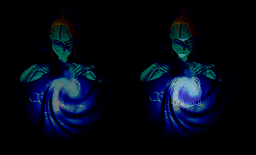 Phantom Cure is a healing spell used to prevent those in the throes of a poltergeist from being entirely drained of their life force.

Magil notes that this spell comes from ancient magic practices. It is used to transfer a disembodied soul to a new host, regardless of the host's size (Lavos is suggested as a possible host). In the original Japanese, the actual name of the Sacred Host Spell is 魔人(majin) which means magical being or magical man; usually, they are simple monsters (sometimes with supernatural power) from mythologies. Ozzie in CT is a typical example.

Serge notes that Magil may have the capacity to use search spells to find items or reveal information about the environs.

Magil's most famous ability, it allows him to disappear into the shadows at will and seemingly become invisible. This made him somewhat reputable after he rescued Kid from her first attempt at gettin revenge on Lynx; he earned the title Shadow Walker at Viper Manor (though elsewhere he is known as Magil of the Shadows). In addition to affording excellent spying, his shadow ability allows him to prepare magic spells while concealed and emerge with them ready to fire. Throughout Radical Dreamers, Magil often disappears during times of meeting with other Manor residents or in battle, only to reappear during a critical moment and save the group. This power is also the basis of an easter egg in Chrono Cross, in which a shadow appears as Lucca's letter to Kid is being read in Luccia's laboratory.

Magil has the capacity to use magic to unlock doors in addition to his other spells.