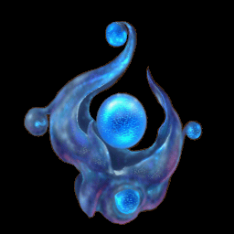 The ultimate, long-lost Element of the seventh color attribute.

The Chrono Cross is a mysterious and powerful item said to be the seventh Element and forged from the Tear of Hate and the Tear of Love. Only the ancient Dragonians, presumably controlled by Belthasar, knew of its existence, and constructed a pedestal for its creation at the Divine Dragon Falls. Legend of it passed down from then on through the Demi-humans and the indigenous villagers of El Nido; when the settlers from Zenan arrived, the Dragonians perished and the myth came to be safeguarded in Guldove by the village shaman. When Serge became Lynx and subsequently reverted back to his form, he obtained the necessary shattered Dragon Tear components to build the Chrono Cross; however, Steena specifically pointed out that it could be done at the falls in Another World. After it was forged, Serge infiltrated Terra Tower; during his audience in the illusory Viper Manor with Belthasar and the Ghost Children, the full power of the Chrono Cross was revealed. The ghost Crono noted that it could cross space and time and unify people's thoughts and feelings; that it could transfer memories; that it could draw on the sounds of the six colored Elements to produce a healing harmony, and that it could combine the sounds of the world into one melody. Soon later, it was used to this end by Serge, who unleashed it upon the Time Devourer, freed Schala, and merged the two dimensions.

Its fate after the battle is unknown; presumably, like Serge's other equipment from the quest, it was discarded. It is a mystery how the Chrono Cross exactly worked, or how Belthasar was able to imbue it with the power to merge the dimensions. It is likely that since the Cross was made of material from each dimension, it had this power; still, its exact methods are unknown.

It can be used to retrieve all one's former characters back on a New Game+. To do this, acquire the Chrono Cross, and then travel to the Temporal Vortex by way of the Hydra Marshes (Home World). The Chrono Cross will react strangely in Sprigg's house and add all the former playthrough characters to the roster. This can be done to get Harle back, provided the last playthrough was completed while she was in the party and Serge was still in Lynx's form.

The ritual of fusing two Prismastones together in the Lost Sanctum carries similarities to the fusion of two Dragon Tears to make the Chrono Cross. The similarity is enhanced by the fact that only one Prismastone should exist in a given world (or dimension).