The Reptites are an ancient race of intelligent, reptilian creatures that evolved on the plains of the prehistoric continent. Well developed before the oral tradition of humans even began, the Reptites subjugated the other animals of the land and dwelled in caverns and stone structures. With scales and cold blood, they survived in the arid air outside and in the damp cool of their shelters. They also had large heads, perhaps responsible for their intelligence and mental powers; one Reptite leader named Azala was able to harness psychokinesis. This intellectual prowess and physical toughness allowed the Reptites to dominate the land for most of their existence, culminating in the construction of a huge fortress south of the central lava fields. This center and their other homes were guarded by dinosaurs and other creatures under Reptite control. The Reptites apparently slept on the ground, as formal sleeping quarters are never seen. The Reptites were deeply respectful of the planet; Azala often spoke of it in reverential terms, referring to it as mother (these religious references were removed in the US translation of the game). They also demonstrated a talent for combat after the Early Humans began to war with them for control of resources.

The Reptites considered the humans inferior to themselves, and called them 'Apes'. The hardy warriors of Ioka were able to challenge them on equal terms, but as the sack of Laruba demonstrated, those not regularly trained to deal with them were cut down easily. Their greatest threat came from Ayla and her friends from the future, who could dispatch regular Reptite fighters. Under Ayla's term as Chief of Ioka, the Reptite Lair was sacked; the Reptites responded by burning Laruba to the ground, which was answered in kind with the storming of the Tyrano Lair. While the Reptites did exist before Early Human settlements, the details of their culture were completely lost with the Fall of Lavos, an event immediately following the defeat of Azala in the Tyrano Lair. Azala, and perhaps other Reptites had discovered previously that the Lavos meteorite was on course to impact the planet; powerless to prevent it, they resigned to their fate. The Tyrano Lair was flattened and push far beneath the planet's crust, and the ensuing Ice Age killed off the cold-blooded Reptites and several other prehistoric animals until none remained. While Ayla did attempt to rescue Azala from the Lair before the impact, no other attempt was made to safeguard the Reptite culture as the early humans were already concerned with their own survival. While even the legend of Zeal would survive to modern times, the history of the Reptites was completely lost.

A colony of Reptites became lost in time years before 65000000 B.C. Known as the Lost Sanctum, it featured an entire swath of land and a fully-preserved and populated Reptite village. The party's visit to the Lost Sanctum illustrated some prototypical elements of Reptite and Dragonian culture, including the existence of shrines that require an emblem to access (the Reptmark for the Reptites, and the Dragon Emblem for the Dragonians). The ritual of fusing two Prismastones together carries similarities to the fusion of two Dragon Tears to make the Chrono Cross. The party also discovered that the Reptites, while intelligent, still believed in mythology (and even considered the party gods after Crono helped them).

After 1000 A.D., large excavations were carried out on central continent Zenan that revealed Reptite dwellings and possibly the Tyrano Lair itself. Analysts noted that the Reptites' civilization existed long before the first human settlements were formed, and that the Reptites had acquired an advanced skill of architecture before becoming extinct in the Ice Age.

The Reptites would exert much influence from beyond the grave, however, as another dimension existed in which Lavos never fell and the Reptites came to dominate the planet with the defeat of the early humans. The Reptites continued to prosper, eventually developing a philosophy of close, symbiotic relationship with nature. As the Reptites evolved over millions of years, they became Dragonians and created vast cities. Their ultimate achievement was the creation of Dinopolis, a floating city headed by the Dragon God, a machine that enabled control over the natural world. Dinopolis was dragged into the Keystone Dimension as part of Project Kid; the planet somehow shunted it there to act as a counterbalance against Chronopolis, which had just traveled backward in time after the Time Crash. The resulting battle would echo the fate of the Reptites millions of years before; the Chronopolis forces gutted the city and captured the Dragon God, whom they split up into six parts and used to terraform El Nido. The surviving Dragonians dispersed onto the new islands, where they mingled with the Chronopolis workers dispatched to populate the new paradise. Some become involved with the humans, resulting in the new Demi-human species. The Dragonians also continued to revere nature religiously, and created several dwellings and fortresses that operated on Elements. Unfortunately, the introduction of settlers from Zenan in 920 A.D. disrupted their fragile way of life, and the remaining Dragonians died off. Their traditions were still maintained by Demi-humans, though by 1020 A.D., only the establishment known as Fort Dragonia remained operative.

After the Dragon God was defeated and returned to the belly of the Time Devourer, the only Reptite influences left in the world were the presence of Demi-humans and the physical architecture remaining around El Nido. 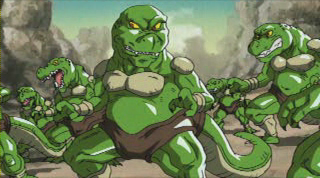