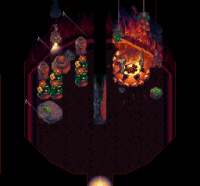 Ioka is the chief establishment of humans in the prehistoric era, and is comprised of several huts and a meeting site in the center of the village. The residents make their living by hunting and trading organic material, and value Dreamstone above all else. The leader of the group, who keeps a ceremonial supply of Dreamstone, is chosen through meritocracy; this is a wise decision considering the Iokans must openly battle the Reptites for control of the land. The people of Ioka celebrate victories of these beasts and other joyous occasions by enjoying good food and drink and dancing at the meeting site; such a party was thrown for Crono when he first arrived. Ultimately, the village of Laruba was briefly absorbed into Ioka after the former burned down during a raid, but the collation did not last long before humans were forced to retreat into the caves for survival. Interestingly, the promise of an Iokan musician that their song would pass to later generations came true, as it was played during the Millennial Fair.

The lyrics of the Ioka celebration dance went as thus: