Laruba is the other major establishment of humans in prehistoric times, and, unlike Ioka, is set deep within a forest to avoid conflict with the Reptites. Its people have purple and deeper shades of hair, and unlike the Iokans, the strongest member of the tribe is not chief -- rather, the eldest holds this position. The Larubans lived in secrecy until a surprise raid by the Reptites which resulted in the complete destruction of their village and the burning of nearby forest. The Larubans were forced to move to Ioka, and leave behind the smoldering ruins of the establishment. Later, a Nu, presumably having come in from the Ocean Palace Incident, stands at the northeast of the ruins and changes party members' names at the player's request. The Nu also gives Crono the SilverRock on first being spoken to. 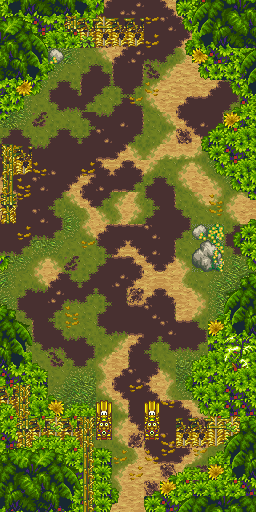