A legendary treasure that enables its possessor to switch bodies with someone else.

The Dragon Tear is a legendary relic of the Dragonians that allows body switching between two individuals. Created by the Dragonians in antiquity, it was given to the shaman of Guldove as a gift, and was said to be the key to activating Fort Dragonia. After the dimensions split, around 1020 A.D., the Dragon Tear of Another World was stolen by Orcha under Lynx's command and delivered to Viper Manor. General Viper was interested in its acquisition in order to fend off a possible Porre invasion, while Lynx had an ulterior motive -- to switch bodies with Serge, thus allowing him access to the Frozen Flame chamber at Chronopolis. Serge and Kid caught a glimpse of it in Viper Manor (originally suspecting it to be the Frozen Flame). When Serge assailed Fort Dragonia, Lynx's sinister plan was achieved and Serge was given the beast's body. The process caused the Dragon Tear to shatter; Karsh and the other Acacia Dragoons picked up the pieces, including the Tear of Hate. Harle informed Serge that he would need the Dragon Tear from Home World to retrieve his old body; he subsequently borrowed it from Steena and employed it in the room of rituals at Fort Dragonia in Home World. It shattered as well, leaving behind the Tear of Love. The two tear fragments were then placed upon the pedestal at Divine Dragon Falls, and combined to become the Chrono Cross.

While the Dragon Tear did not enjoy the same rumors of wild power and legend as the Frozen Flame, it was still revered as a holy object by the residents of El Nido. How it precisely contained the power to form the Chrono Cross is unknown; the Chrono Cross's power to combine the dimensions is likely a result of its formation by Dragon Tear pieces from both dimensions. The exact nature of its power is unknown however. It was remarked in the GamePro interview that "the act of restructuring a whole body was too great a strain on the system and caused it to overload, shattering the Dragon Tear once Serge was reborn." This opens the possibility that the Dragon Tear could have served other functions, since switching bodies guaranteed shattering in both cases of such use. 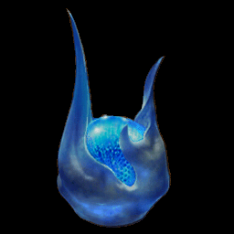