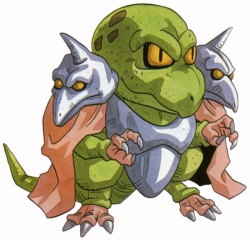 
Azala is the infamous leader of the Reptites and the principal villain of the prehistoric age. A very intelligent and formidable opponent, she leads the entire Reptite race from atop the Tyrano Lair, a fortress constructed south of glowing lava beds. She also spends time at an encampment within a cave south of Ioka. Besides holding the keys to the BlackTyrano, she boasts telekinetic powers and an advanced intellect. She commands the Reptites and the various savage animals that roam the land in war against the Apes, whom she regards as inferior. Her personal bodyguard is a massive creature called Nizbel who also displays a level of intelligence above that of the other animals and Apes.

Azala's history and role as Reptite leader are unknown. Also unexplained is her reason for warring with the Apes except for control of the planet; she wishes to destroy both Ioka and Laruba. She displays pride and intolerance for opposition in her taunts to Ayla and Crono's party in the Reptite Lair. Azala became aware of Lavos's impending impact sometime before the fall. She accepted that the event would cause an Ice Age and wipe out the Reptite race, forecasting lives of neverending hardship for Ayla's descendants. Azala refused to be saved from the Tyrano Lair's destruction, and wisely predicted that the world's future was in jeopardy due to Lavos's arrival. She perished in the destruction of her fortress. She was confirmed female by Chrono Trigger DS.

Azala means home in Basque, but this is probably meaningless coincidence.