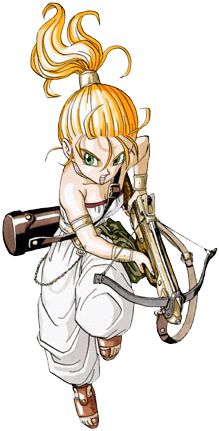 Princess Nadia, daughter to King Guardia XXXIII, is an unhappy royal teenager. The proverbial "poor little rich girl," she detests her lonely life at the castle, and longs for the freedom of common life. She has often disguised herself in "normal" clothes and fled Guardia Castle in search of adventure and excitement, but she is still young and innocent at heart.

One of her greatest escapes was to the Millennial Fair. There, she met Crono by bumping into him, and was later persuaded to try out Lucca's Super Dimension Warp. A reaction with her Pendant (the work of the The Entity) caused her to be sent to 600 A.D., where she was mistaken as Queen Leene. After Crono found her, she was most likely temporarily detained by the Entity so that Queen Leene would be found and Crono would meet Frog. After she is rescued, Marle permanently joined Crono in his quest. As the adventure wore on, Marle maintained jovial spirits and cheered up the party on more than one occasion. She was crushed when Crono died, but resolved to bring him back as strongly as his other friends. Marle's relationship with her father was strained by his attempts to control her and his sadness over the death of her mother, Queen Aliza; Marle tried to make amends first by bringing him Jerky, but her father verbally disowned her for jeopardizing his cholesterol. When Yakra XIII tried to take over the Kingdom of Guardia, Marle intervened and saved her father, and the two made amends as the King finally welcomed her friends to the castle. After the defeat of Lavos and the end of his quest, Crono and Marle affirmed their love and the two were married; this is depicted in the ending cutscene of the PSX version. Little is known of her fate after this, as she was presumably involved in some incident in the Fall of Guardia. Crono and Marle almost assuredly survived according to Lucca's reference to her "friends" in a letter written after that date.

Marle's fate is implied to in Radius's statement about the Kingdom of Guardia no longer being peaceful. She is one of the Ghost Children at the Dead Sea and Opassa Beach.