Queen Leene is the bright, cheerful ruler and wife to King Guardia XXI in 600 A.D. She married into the family in 590 A.D., and was present to send off Cyrus and Glenn to search for the Masamune and Hero's Medal. Her deep care for the two and others evidence a touching, considerate personality and kind disposition. During 600 A.D., she was kidnapped by Yakra as part of a plan to cause chaos in the Kingdom of Guardia; originally, she was to be found by an intensive search of the Cathedral, but this was altered when Marle entered the area from the Millennial Fair. She was mistaken to be the queen, and the search was withdrawn. Leene meanwhile was interred in the Cathedral, apparently to be eaten; after Marle had disappeared, Crono, Lucca and Frog quickly defeated him and released the queen. She expressed her gratitude, though Frog departed, feeling guilty for her abduction.

When the King was injured in battle shortly after, Leene knelt by his side throughout his recovery. Later, she oversaw the keeping of the Rainbow Shell within the castle, and composed a letter to her descendant. Cyrus, too, was able to rest in peace after learning that she was in good hands with Frog. After the events of Chrono Trigger, the smith Banta completed Leene's Bell.

The letter to Marle follows: 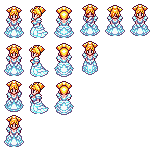