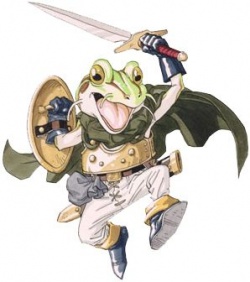 Frog began his life as Glenn, the squire to Cyrus, who served as Knight-Captain to King Guardia XXI. Glenn always looked up to the older warrior as a mentor and "big brother" figure, as they had been close childhood friends -- Glenn had been picked on as a child, and refused to fight back for fear he would hurt the offending kids. Glenn accompanied Cyrus on his journey to the Denadoro Mts and helped retrieve the mythical Masamune from its resting place atop the mountain peak. Prior to this, the two recovered the Badge of Courage from the Frog King. Ozzie and Magus attacked the pair in the mountains, and the dark wizard killed Cyrus outright; his last words to Glenn were to take care of Queen Leene. Before Glenn could take action, a mocking Ozzie persuaded Magus to transforming Glenn into a huge, anthropomorphic frog. Frog established a forest abode in the Cursed Woods and resumed service to the Kingdom of Guardia; in the Lavos Timeline, Queen Leene was kidnapped and later rescued by Frog from the Cathedral. It is unknown what happened to Frog in this timeline afterwards, or whether he defended Zenan Bridge. In the Keystone Timelines, Frog assisted Crono and Lucca in their rescue of Queen Leene, afterward departing to the Cursed Woods. After Crono brought him the resurrected Masamune, Frog joined the party for good. At the North Cape, Magus offered Frog the chance to kill him in a duel. While the player has the option to kill Magus in Trigger, the sequels confirm Frog declined.

Frog suffered from guilt most of his life over Cyrus's death. This was resolved in part during the Cyrus's Ghost sidequest. Frog was allowed to speak to Cyrus beyond the grave; the exchange inspired Masa & Mune inside the Masamune. He learned that a hero's power comes from within; specifically, from force of will (this was altered somewhat in the English translation of the game). It is unknown what became of Frog after the events of Chrono Trigger; the PSX version depicts him returning to human form, while the SNES version suggests he remains a frog. Since Masato Kato personally supervised the PSX cut scenes, the accepted canon is that he became a human. We also know that Magus was planned to be in Chrono Cross, which means he is alive after Chrono Trigger. The solution is that apparently the spell was broken somehow. Glenn probably returned to Guardia and lived out his life peacefully, bequeathing the Masamune as an heirloom of Guardia.

Frog was created after Square suggested that a non-human character be created for the party. Developers adapted a Toriyama sketch of a frog into the character (this information comes from the interview in Chrono Trigger: The Perfect). Frog's characterization was markedly different originally; he was not the formal knight Ted Woolsey made him out to be. Frog was a little more rough around the edges and direct, unafraid to speak his mind take a verbal potshot at his enemies. He also lacked the formal Medieval speech patterns. For instance, when Ayla asked Crono whether she could eat Frog, Frog originally insulted her outright, calling her the equivalent of an idiot. Seconds later, when asking about Magus, he remarked:

This characterization paints Frog as more of a cool, dashing adventurer. Translation thanks to KWhazit.

Chrono Cross Ultimania states that Glenn was named after Frog, but this is not stated in the actual game.

Frog is alluded to by Magil as the owner of the Masamune. Magil notes that Frog is not an enemy.