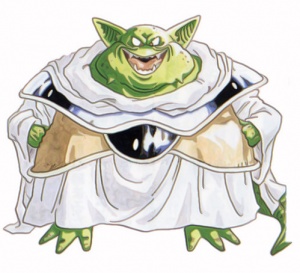 Ozzie is a commander of the Mystics in the medieval era. He is similar to Zeal's Mages in appearance and may be a descendant of that race. The retort-dishing, venal foe got his start in changing history by finding Janus after the Ocean Palace Incident. After discovering the boy's powers, Ozzie apparently raised him and instilled within him the idea of starting the Mystic War. Once the war reached full swing, Ozzie took the mantle of generalship and led forces around Zenan. He reached Zenan Bridge but was turned back; after Magus disappeared from summoning Lavos, the effort fell into disarray. In the Keystone Timelines, Ozzie tried to bait the party into several mechanical traps as they progressed in Magus's Lair, but failed each time.

His battle strategy consisted of freezing himself, a technique which undid him in the end. After Magus joined the party, Ozzie holed up in his own fort. Before Magus's Lair fell, he managed to take most of the treasure to his new abode (this tidbit was lost in the English translation). He once again attempted to foil the party with traps but was defeated when a simple Cat unlocked a trap door beneath him. Wretched and bitingly taunting until the end, he would not make another appearance in the game.

Binegar is a play on vinegar. Ozzie's American name is a pun on Ozzy Osbourne, lead singer of Black Sabbath.