The Bend of Time is a dimensionally transcendent place where one can access monsters from various stages of Chrono Cross. It is believed to behave on Time Error. It's staffed by two Octo monsters, probably meant to represent Gaspar and Spekkio, and features architecture that resembles the End of Time. In addition to the Gates allowing battles with former enemies, the Bend of Time is also home to the Mystical Knights, who reside in a room only accessible on a New Game +. They can be fought; after their defeat, the Spekkio Octo will allow Serge to perform a trial to receive a Dreamer's Sarong. The competition involves running around the room a certain number of times that matches up with a number Spekkio is thinking of. This is reminiscent of the trial Crono and his friends had to complete to receive Magic. 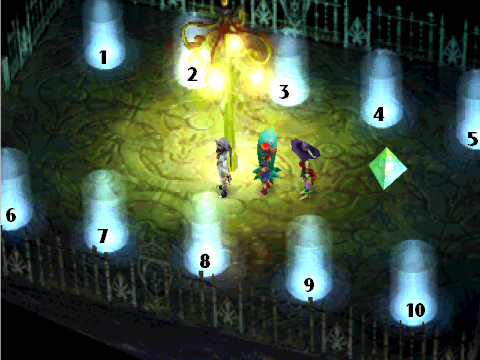 Each portal leads to a different area.

From: Chronology
From: Locations (Chrono Cross)
From: Theory (Principles of Timelines and Dimensions)