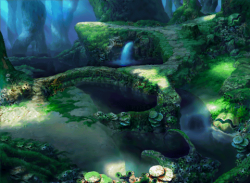 
Shadow Forest is a wooded area to the east of Viper Manor. It is adorned with arboreal glades and a few ponds connected by a running stream. Viper Manor draws water in its well from Shadow Forest, and also connects its sewage system with the river. Many unique creatures dwell in the forest, including Octo monsters who prefer the fruit of the area, which grows in green, red, and blue varieties. Mushrooms also proliferate through the area; Lisa's dad collected them often there. No events of historical magntitude occurred at Shadow Forest until 1020 A.D. in Another World; there, Nikki retreated while preparing his big show at the Viper Festival and was attacked by a few Bulbs; Serge helped him defeat them, and then talked to Nikki, who eventually joined his party and helped Serge face Zoah, who guarded the entrance to the well. They defeated him and later infiltrated the manor. In Home World, Serge later infiltrated the sewer system through Shadow Forest, also stumbling across Lisa's father. After saving a man from monsters in the sewer system, he returned and gave Lisa's father a special mushroom he received in compensation. This turned him into Funguy; he thereafter joined the party, though during the initial confusion some of his spores landed on the ground. He returned later to find baby mushrooms that stuck with him afterwards as his technique Myconoids.