Zoah is an enigmatic member of the Four Devas of the Acacia Dragoons. His origin a complete mystery, he apparently came from El Nido and naturally fell into the service of Viper Manor given his physique and mindset were both suited for combat. Something adverse happened to him in the past, but this is never mentioned. He wore a helmet at all times, and little else to show off his muscles. When Serge tried to infiltrate Viper Manor via Shadow Forest, he blocked the party off temporarily by challenging them in battle. Later on, he fought with the party again at Mount Pyre. After the Fort Dragonia doublecross occurred, he helped Karsh take Viper back for recovery. He then wound up on the S.S. Invincible, where he preferred to sleep when not traveling. He often muttered in his sleep, dreaming of something to eat (his utterances included "YUMMY!"). He then accompanied Serge in the fight against the Time Devourer.

Zoah remains a complete mystery concerning his past and what lies under the mask. He also probably has a deep and baritone voice, implied by the fact that his dialogue is displayed in all capitals in Chrono Cross. According to Room #1 of the Ultimania developer interviews, Zoah was going to have a backstory that was dropped before finalization:

"We might not be able to talk about the official game now, but there's a secret under Zoah's iron mask. It's said that his face was once injured in war and now he hides the wound with an iron mask, but in reality he's wearing it so as not to reveal his identity. Zoah's role was to be that of the prince of a certain country, secretly watching over the protagonists' doings from the beginning. If you had chosen the forest route (Slash Route) when it came time to infiltrate the Viper Room, you ought to have been able to see an event shedding light on Zoah's true identity."

Most Cross characters have hit values for heavy attacks of 20, unless they target all enemies (at which point they're only 10). Square apparently made a mistake with Zoah and Razzly; Zoah's is only 10, while Razzly's is 20. 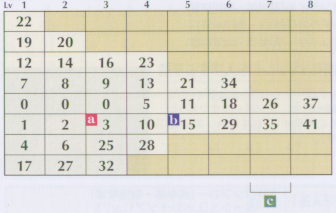