Time Error is a simple concept, and is very important to understand the way time operates in the Chrono series. In the simplest of terms, Time Error is the way time flows in places like the End of Time compared to the way it flows in the rest of the world. Consider, for example, how people in 1000 A.D. would view Crono's changing history. The Porre Mayor is originally a greedy man; after Crono visits 600 A.D. and gives the Jerky to his ancestor, he becomes nice thanks to a family policy. Does anyone in 1000 A.D. recognize the change? No; history was always that way to them. However, aside from Crono's team, one other person is able to remember the old, evil mayor -- Gaspar, at the End of Time, who is able to watch Crono complete his quest and change history several times. The End of Time seems to transcend the normal flow of time; people there are aware of changes made to the normal timeline of the world. In essence, time can be said to flow at the End of Time "perpindicular" to the way it flows in the real world. This transcendental time flow is called Time Error. Another way to think of it follows; firstly, imagine that Crono goes back in time and labors hard for two hours. How would people in the normal timeline measure the duration of Crono's changing history? They could not; that history would seem normal to them. Yet from the End of Time, Gaspar can clearly watch Crono arrive, work for two hours, and then depart. 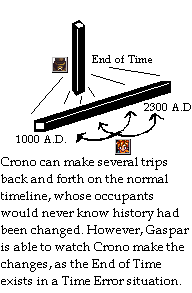 This theory was developed by Leebot in the article Beyond Time, which deals with locations exhibiting a flow of Time Error. Only time portals and locations outside the axis of time (such as the End of Time, the inside of the Black Omen, or the Darkness Beyond Time) exhibit this flow. Copied here from his explanation page is the full theory and its effects in time. Please note that the theory "Determining the Destination of Time Travel via Epoch and Time Gates" that appeared in the previous version of this article explained this effect, but the Time Error theory overall presents a more unified principle.

Example: A time portal is created at time X and Time-Error 0. At time X+T, the Time-Error of the Portal is T.

This neatly explains the nature of the passage of time in places such as the End of Time and the Darkness Beyond Time. It also works for dimensions; if Serge leaves for Home World and returns to Another, he'll return at the time of his original departure plus how much time he spent in Home World. Time travelers conducting business in history can also said to exhibit a personal tabulation of Time Error. Let's say that after Crono went to the End of Time, it took him twenty days of his personal life to defeat Lavos. In actuality, he skipped all over the eras of the timeline, but at the End of Time, twenty days would have cleanly passed. This will come into play for the Time Bastard theory, presented a little later in this section. You can also think of it according to this example by DBoruta and Leebot:

1) We know that there exists at least four dimensions: 3 dimensions in which an object can move physically, and then we have time being the fourth dimension. 2) When time travel is achieved, as in the case of the events of Chrono Trigger, we now have time being considered an axis of position instead of truly being an axis of time, and a new "time" axis is required to measure where the object is according to the other 4 dimensions (This is describing what you were talking about with the future continuing on and the past being time-bastarded out as far as the time travelers are concerned).

So, this agrees with the notion that there could be multiple time axes - one is 4-D time, and one is 5-D time. So, when time travel is achieved by an object, that object is being described in 5 dimensions instead of the normal 4.

Note that it's never explicitly stated that anyone other than Gaspar and Spekkio can observe what's going on in the timeline from the End of Time. They alone may have this power thanks to their magic or supernatural nature. Thanks to Pyramid

From: Theory (Principles of Timelines and Dimensions)