Spekkio is an odd, shape-shifting creature at the End of Time of unknown origins. His form depends on the level of strength held by the person viewing him. He refers to himself as the God of War, and can teach people Magic - that is, assuming the person in question was born after humans gained genetic magic ability (this is the reason Ayla cannot learn magic). This is done by unlocking the biological ability to use magic, or priming it somehow; Ayla lacks the basic hereditary framework to allow its use. He can also be battled for practice. Physical attacks do not damage him; only magic can hurt him. Winners receive prizes, which vary on the form he is in when he is defeated.

Spekkio is a jovial character, and often taunts and pokes fun at the party as new members are brought before him. However, he gives Magus full due respect when the two first meet on account of the wizard's huge magic power. While his exact method of arriving at the End of Time is unknown, he is said to observe all kinds of battles from the area and study war with unrivaled dedication. Throughout Chrono Trigger, he helps the party with his gifts and happy spirit. Interestingly, Spekkio in the Japanese version of Chrono Trigger had a more cynical style, calling Gaspar an old codger outright and treating the party with more jagged quips. He is also referenced as the God of War.

In the Bend of Time, Spekkio seems to still be around. If Janice is brought to the area, the timekeeper will note that the "God of Combat" has taken an interest in her, and she will be bestowed her level 7 tech, What'sUpDoc. He stillhas his own separate room, and after a trial similar to the one in Chrono Trigger (involving running three laps around the room) he offers a battle with Ozzie, Slash, and Flea, the Mystical Knights. A minigame ensues in which one must run a correct number of laps to receive a Dreamer's Sarong. After the minigame is won, he remarks that perhaps he will see the player in another, different dimension. This strongly suggests that it is indeed the cheerful creature.

Specchio in Italian means 'mirror,' which is quite suited for his role in the game. 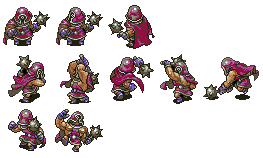 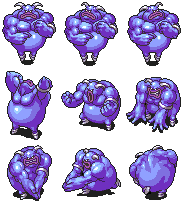