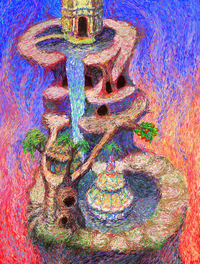 Music: A Narrow Space Between Dimensions

The Temporal Vortex is a colorful, strange place apart from the two dimensions of Home and Another. It is home to several strange monsters and a type of orange fruit that allows a meager living possible for any beings stranded there. Impossible architecture is also present, suggesting the vortex is some kind of chaotic anomaly. Sprigg was somehow thrown there during her checkered history; she subsisted off the orange fruit and a juice brewed with the Vortex's connection to the outside world—a dimensional distortion leading to the Hydra Marshes that she did know of. When Sneff found himself there, she gave him a berry that enabled him to turn people to cats and back. Lynx forced Serge into the Temporal Vortex after he switched bodies with the boy at Fort Dragonia; Serge subsequently found Sprigg and was aided by Harle in escaping the world. Serge had to choose who he believed to be his real self in a strange room of doors in order to exit the area. Travel was then abilitated by the newly discovered dimensional distortion in the marshes. Sprigg became upset at this revelation, lamenting that her juice had been brewed with swamp water.

"In the old days, when I was on my journey of training, I got a mysterious fruit. I think I was in a Temporal Vortexnote or somewhere..."

From: Chronology
From: Locations (Chrono Cross)
From: Theory (Principles of Timelines and Dimensions)