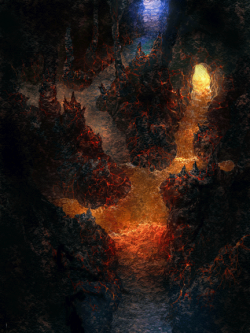 
Mount Pyre is a volcanic region on the southeastern corner of the main El Nido island. Composed of permanent lava flows, it poses a threat to travelers and stands in the way of reaching Fort Dragonia, rendering it inaccessible by any other means. Firey beasts thrive around the lava, which must be crossed by a path winding through caves and flows. Chronopolis selected it as home of the Fire Dragon; when the dimensions split, the Fire Dragon occupied the area in Another World. In this dimension, Serge was forced to cross Mount Pyre on the way to Fort Dragonia and the Acacia Dragoons; he employed the Ice Breath from the Water Dragon to freeze the lava and pass through the hot landscape. He was challenged two times on the way; once by the Fire Dragon, who merely tested his abilities and did not spark an all-out battle, and once by the three Devas of the Acacia Dragoons. Later, he returned to battle the Fire Dragon for the Red Relic; after this, he went to Mount Pyre in Home World, as he had to cross it to reach Fort Dragonia there to retrieve his old body with the Dragon Tear.