Marcy is the youngest of the four Devas and a fiery girl who gets her way while maintaining strong likes and dislikes for others. Marcy was born in tragedy; she was the last child that Zelbess gave birth to from Fargo. Soon after, the falling out between Viper and Fargo occurred, and Fargo's family were forced to flee for their lives. While Zelbess died, Luccia was able to save Marcy, who she began to raise from a distance. Marcy was free to do what she pleased, and developed a picky attitude while working on her fighting skills as she grew up. When Luccia moved to Viper Manor in 1017 A.D., Marcy moved with her, and was introduced to the Acacia Dragoons formally. She became reputable for her fighting skills, and was soon promoted to the position of Deva alongside Karsh and Zoah (and Dario, if he were still alive). The details of her parenthood were kept secret during this time. In 1020 A.D., she encountered Serge in the library of the Manor, eagerly jumping at the chance to inflict pain upon the intruders. However, she was beaten and forced to retreat; this caused her to hate Serge with a passion. She unleashed her rage upon him at Mount Pyre before the Fort Dragonia body-changing ritual took place, though she was beaten once more. After the Devas discovered the injured Viper and the shards of the Dragon Tear, Marcy collected the pieces and returned to Termina. She eventually joined Serge's party once all the Acacia Dragoons met at the S.S. Invincible; while traveling with him, she learned that Nikki was her brother and Fargo her father. This allowed her to reconcile with her half Demi-human heritage.

Chrono Cross HD Remaster Twitter bio: Marcy - "One of the Four Devas of the Dragoons" At just nine years old, she is a fearsome girl who is one of the four Devas of the Acacia Dragoons. She still has a pretty face with a hint of innocence, but when she fights, she freely manipulates many sharp metal threads and mercilessly tears through her opponents. She was separated from her parents soon after her birth, and was raised in Viper Manor under the protection of Luccia. As a child, she has both innocence and cruelty, and is insensitive to the pain of others.

Marcy was frozen with the other Acacia Dragoons in the Dead Sea in 1017 A.D. 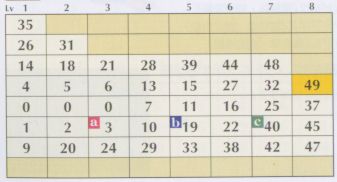