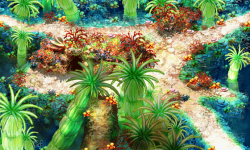 
Lizard Rock is a rocky area that separates Opassa Beach from the rest of the main El Nido island. Water ran through it in several spots, and palm trees adorned the rough landscape. Populated by Komodos, it became a popular hunting ground in Home World around 1020 A.D.; some residents from Arni would take them as pets, while others would try to nab a scale off them. Serge succeeded in getting three, though he angered the Mama Komodo and had to subdue the beast. In Another World, Lizard Rock was outfitted with signs warning visitors to turn back due to the danger of Opassa Beach, where Lynx drowned Serge.